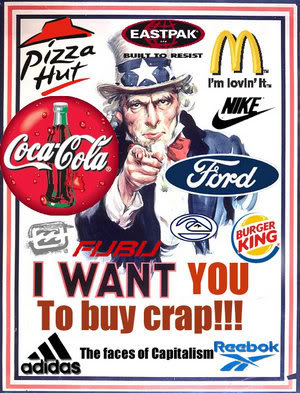 “Give me capitalism, or give me death!”

Capitalism is, as defined by Wikipedia, "an economic system that became dominant in the Western world following the demise of feudalism. There is no consensus on the precise definition, nor on how the term should be used as a historical category. There is general agreement that elements of Capitalism include private ownership of the means of production, creation of goods or services for profit or income, the accumulation of capital, competitive markets, voluntary exchange and wage labor. The designation is applied to a variety of historical cases, varying in time, geography, politics and culture".

Ghost sees Capitalism as the be-all and end-all of human achievement; the economic and political system of advancing human society and way of life. Ghost began his Blog Talk Radio career as a Conservative but, after three years of decline brought on by inept politicians abandoned it for Capitalism. Ghost explains his switch during the first episode of the True Capitalist Radio Broadcast.

Ghost often claims (about the United States of America) "We used to be the bastion of capitalism; now we're the bastards of capitalism." Ghost chose his 2012 Presidential Election GOP candidate, Herman Cain, later Mitt Romney, based on the belief that he was the most capitalist of the candidates. Respectively, for the 2016 Presidential Election, Ghost endorsed Donald Trump due to his Capitalist nature, claiming he is causing a "Capitalist Revolution", and upon his victory in the elections, completely supported his administration.

Retrieved from "https://truecapitalist.miraheze.org/w/index.php?title=Capitalism&oldid=11657"
Categories:
Cookies help us deliver our services. By using our services, you agree to our use of cookies.