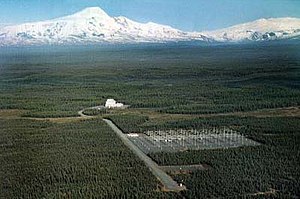 The High Frequency Active Auroral Research Program, better known as HAARP, was an ionospheric research program created in 1993. It was jointly created by the United States Air Force, the U.S. Navy, the University of Alaska - Fairbanks, and DARPA (Defense Advanced Research Projects Agency). It has been linked to a lot of Conspiracy Theories-related to weather incidents, including Global Warming.

Ghost has been critical of HAARP, and believes that it was creating the 2016 Texas floods as means of weather warfare against Texas.

Because of the floods, HAARP has become a method of pissing off Ghost for the Troll Terrorists and Cyber Vermin. Both HAARP and the Texas floods have been used to troll Ghost during Twitter Shoutouts, with names such as Texas Drowning in Debt, Quit HAARPing on it, and HAARPing Your Mellow. Radio Graffiti had plenty of flood-related trolls as well, ranging from people making flood jokes (such as Tub Guy, Mickey Mouse, and even the Teutonic Plague), to a handful of splices. Notable splices included a mock movie trailer titled, "Little Texan, Big Flood," a remix of "Singin' in the Rain" by Coodoo, and a remix of Stevie Ray Vaughan's "Texas Flood". After the floods in Texas stopped, the HAARP-related trolls stopped as well. However, at least one troll will crack a joke whenever some bad weather happens in Texas.