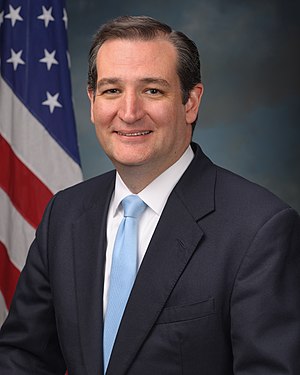 Ted Cruz is a Texas Senator who competed with Donald J. Trump for the Republican nomination in the 2016 American Presidential Election.

He ultimately suspended his campaign after losing the Indiana primary in May 2016. With Cruz no longer having a reasonable path to the nomination, his plan to win by blocking Trump from winning the first ballot failed.

Ghost claims that the Republican Party themselves dislike him, that this explains why the party has discussed Paul Ryan and other potential candidates despite actively promoting him against Trump. Ghost has claimed the man is not a 'real Texan', and actively criticizes his birthrights, given he was born in Canada. Unsurprisingly, Cruz has become a common troll theme on the show as a result. A handful of Ted Cruz splices were made when he was a Republican candidate.

Even after Cruz dropped out, Ghost was enraged when Cruz was pursuing for internet regulation. A Twitter name "Cruz 1 Internet 0" set Ghost off, blaming Cruz and the bureaucrats for trying to regulate the internet.

Ted Cruz did do something Ghost appreciated, that being the El Chapo act, a plan to use El Chapo's confiscated money to pay for the planned border wall between the US and Mexico.

During Capitalist Episode 227, Ghost called for the Capitalist Army to rise up and help spread the rumors of his alleged sex scandals. Ghost often sent out orders to tweet Cruz hashtags alleging his affairs. This would go on until the end of March 2016.

Retrieved from "https://truecapitalist.miraheze.org/w/index.php?title=Ted_Cruz&oldid=5344"
Categories:
Cookies help us deliver our services. By using our services, you agree to our use of cookies.