“I want to do my show! Lemme do my shoooow!”

—Ghost, on a typical episode of The Ghost Show 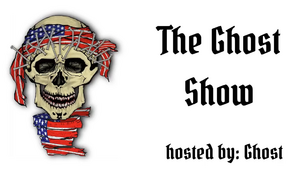 The Ghost Show is chronologically the fourth radio show hosted by Ghost from True Capitalist Radio and the first one to be, at least thus far, broadcasted entirely outside of BlogTalkRadio network, instead being broadcasted from Ghost's YouTube channel, VaughnLIVE, Periscope, and DLive. The show was first broadcasted on December 31st, 2018.

Throughout 2018, Ghost and his supporters steered the direction of True Capitalist Radio away from trolling into the realm of seriousness. This led to the Fourth TCR Cold War. After months of complaining on how no one listened to his show, plus the fact of all the drama happening outside the show, Ghost formally ended TCR in November, and seemingly left the internet.

Many assumed this was the official end of Ghost in that he would be gone permanently, however to the surprise of many, he announced a stream on New Year's Eve 2018, entitled The Ghost show. He stated how he was being far too angry and political and how he wants to bring back the fun in the show be bringing back Radio Graffiti. He later raged on how people outside were lighting fireworks despite being against the law for 30 minutes.

Several trolls have theorized the reason as to why Ghost has taken a different direction with his show, with many speculating him turning over a new leaf and bringing back the audience he once had before his autist rants. Because of the implementation of Streamlabs and media sharing, Ghost has motivation to do Radio Graffiti what with people donating money to him.

Unlike True Conservative and Capitalist Radio, Ghost has stated that he intends to step away from politics and his intense beliefs, though he still intends to give market advice on the show. Ghost also brought back the Radio Graffiti and Shoutouts sections in the third episode that were missing from the later episodes of TCR.

In addition, Ghost now takes Shoutouts from not only the livechat on YouTube, but from StreamLabs as well for anyone who donates more than 25 dollars. Aside from getting shoutouts, Streamlabs users can call in during the show at any time, which has opened up opportunities for trolls to annoy Ghost with not only humorous names, but with audio clips as well.

Much like TCR since after the Break, Ghost does the show on Mondays, Wednesdays, and Fridays, however by December, the Schedule would change to Tuesdays and Thursdays due to Ghost not having the energy to conduct the show anymore, despite his claims of being a machine in the past. The episodes are typically longer than his previous broadcasts, taking approximately four to six hours each.

StreamLabs (later StreamElements) and media sharing have proven to have backfired on Ghost, as people consistently spam the donations with Text-to-Speech live on his show. Ghost is constantly interrupted with Text-to-Speech and media sharing to the point where he rages for over an hour straight. Such Text-to-Speech donations range to insults, market coverage, serious statements for Ghost, calling out trolls and other listeners, etc., all to Ghost's rage or gratitude, depending on the nature of the donation. Media share would consist of random audio clips, often times being ear rape. Ghost eventually switched to StreamElements after having technical issues with StreamLabs. He has also cut media sharing out of the main show, only turning it on on the Saturday Night Troll Show or on an occasional Baller Friday.

During Episode 46, a person by the name of "MARINES R GAY AF" initially sent in a singular donation of $12 to Ghost for him to play a video live on the show. This eventually prompted other TTS trolls to follow suit, spamming Ghost with 12 dollar donations 'obligating' him to play said videos for his reaction. Ghost would eventually raise the price for the '12 Buckers' as he called it of the YouTube link videos to 15 dollars, theorizing that the increase in price would dissuade people from spamming donations. This of course failed, as people still continued to make donations linking Ghost to YouTube videos. Ghost would raise the price again to $18.66 (possibly due to StreamElements taking $3.66 off donation revenue).

The video donations trolls have been frowned upon by both Ghost and his viewers for a variety of reasons. A few trolls have donated bait-and-switch videos containing disgusting material, which has greatly sickened Ghost and many of his viewers, some of which have quit watching because of this. Certain trolls, such as GenoX1987 and DanTheOracle, have deliberately made $18.66 donations during Radio Graffiti to purposely irritate the RG fans, and have been considered newfags for this.

Ghost may do Forum Shoutouts from the Ghost.Report forums and/or Radio Graffiti around the end of each show.

Listeners have addressed their disdain for StreamLabs/StreamElements, as the serious listeners can't listen to Ghost's market hour, and trolls who wanted to save Ghost's rage for Radio Graffiti. Ghost claims the reason he keeps TTS on is for fan interaction, but many theorize it's because of Ghost's Jewish tendencies to make money off his fans.

The listener base has been divided between Serious listeners, Newer Trolls, and Older Trolls.

Serious listeners often donate large sums of money (ranging anywhere between 25 to 100 dollars) to receive praise from Ghost and to show themselves off as being capitalists against the trolls. These people often get a negative reaction from the trolls in the chatroom and even get called out in TTS for it.

Older trolls have criticized the Newer trolls for giving money to Ghost, as well as their lack of knowledge of the show, often employing old worn out trolling tactics to even playing old splices on Radio Graffiti or when Ghost takes 15 Buckers. Old trolls feel the quality of the show had majorly dropped, with many no longer tuning in to the show.

Another form of criticism would be when TTS trolls would donate Youtube Links either during Radio Graffiti, or at the end to prolong the show even further, much to Ghost's and the listener's disdain as such donations can pile up to the point Ghost could be up past 3 A.M EST watching videos. Such incidents can make a single episode 6+ hours long with over half of the content YouTube Link Donations.

In late 2019, video pile ups have caused Ghost's anger to affect forum shoutouts and Radio Graffiti where he won't do either, or a show entirely from pure exhaustion, leading him to conduct one to two shows a week, with RG only a few times a month.

Drama has arisen because of the divide between New and Old trolls. Newer Trolls would occasionally call for a Troll War for multiple reasons. Some of these New Trolls who call for Troll War often don't know what a troll war even is, while those who do know call for one anyway without comprehending the implications of what a troll war could bring. But the main reason is that Ghost genuinely gets angry over cries for war. The term Troll War has evolved into another means of trolling Ghost.

Older Trolls have condemned the Newer Trolls for using such tactics as none wish for an actual Troll War to spark. Of course, warnings from Ghost and Old Trolls have fallen on deaf ears as the Newer Trolls use the term Troll War to anger Ghost and even go so far as a means of collateral to get Ghost to kneel to their demands. Such example of this is involved several Newer Trolls demanding Ghost to bring back the Saturday Night Troll Show, otherwise, a Troll War would happen. Ghost would give in, thus reviving the said show.

Other drama would include trolls exposing Ghost's serious listeners or closest fans by searching their YouTube names to find anything that would incriminate them and cause Ghost to rage, similar to the Thunderdomes in Ghost's Discord Chat.

Copyright infringement has been a consistent issue for the show due to the new platform. Unlike BlogTalkRadio, which was usually lax on copyright, YouTube frequently flags TGS episodes that feature copyrighted music or clips either from media share, 12/15 Bucker YouTube donations, or on Radio Graffiti. These videos are subsequently taken down temporarily and get demonetized. Thanks to the TTS system however, this hasn't had much of an impact on Ghost's ability to make money from the show.

However, The Ghost Show Episode 71 was taken down not only for copyright infringement but as well as for violating YouTube's terms of service. It has been theorized that Ghost's channel was struck because of it, although the cause of the strike has yet to be known. The same would happen again on The Ghost Show Episode 118 as TTS trolls would donate copyright videos, causing the stream to be halted but not taken down completely.

It is possible that the trolls who donate copyright videos do it: for the sake of trolling, forcing Ghost to return to Vaughn permanently, or getting rid of him entirely.

While broadcasting The Ghost Show Episode 74, Ghost's livestream was taken down mid-show and has had his streaming privileges suspended for the week due to receiving a community guidelines strike for supposed "hate speech" due to newfags reporting his stream after he said faggot 3 times.

The next day, Ghost posted on his blog a rant about YouTube supposedly censoring him.

For Wednesday's broadcast, Ghost posted a link on his blog where he was going to be streaming, for the time being, announcing that he would be streaming from VaughnLIVE until further notice while uploading recent episodes on his BitChute account.

Despite his streaming privileges being reinstated the next week, Ghost continues to stream from VaughnLIVE and has essentially declared VaughnLIVE his new home for streaming The Ghost Show. He has stated that streaming on YouTube was essentially walking on eggshells, risking getting "censored", and that he prefers VaughnLIVE due to being a mom-and-pop store for streaming. Ghost would also post the archive of the Vaughn streams on his Bitchute. People have expressed their frustrations with Vaughn live, citing Cans Abuser and others to set up Relay Shows on YouTube for anyone not wanting to deal with Vaughn.Live.

Relay streams have been used as a method of trolling as anyone would donate a link to Ghost to click on his own stream, causing endless loops and echos, much to his rage. Initially it would be funny until the joke was run to the ground and even Ghost not making a big deal as he once did.

In early October, Vaughn.Live would experience technical issues with its servers due to not being able to handle a large influx of people from Ghost's audience. This would cause Ghost to return to YouTube for The Ghost Show Episode 108. Ghost would state firmly he would not take youtube donations anymore and wanted the show to be serious while keeping the SNTS on Vaughn. Of course people would continue to donate videos, returning the show to how it was at the beginning of the year.

Brief Move to Periscope and Then to DLive

After experiencing many issues with Vaughn.Live, Ghost decided that he had to move to another website to stream. He decided on streaming on Periscope around late February 2019. However, Ghost was quickly banned after streaming 2 episodes for allegedly racism or scamming. Ghost later went to DLive in March, where he has been streaming episodes ever since.