“What is this, "Playing for the Pink Team Radio" for Christ's sake, I mean good God! Jesus Christ, man, I got bronies, I got bull dyke feminists, I got long-haired, bet-wetting liberals, I mean, I've got commies, I've got trolls, I've got-I've had enough! I've had enough, you people are a bigger pain in the ass than a STICKY SHIT!” 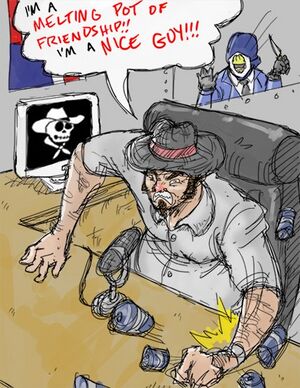 Depiction of typical broadcast of the show.

Formerly known as True Conservative Radio, True Capitalist Radio was an internet radio talk show hosted by a Texan man known only as Ghost from 4-7pm CST on most weekdays. He has few legitimate fans, and it was not uncommon to see more than 400 trolls in his chatroom back in the day. The show consisted nearly entirely of either troll calls, or Ghost rambling about the markets/current events. His show is genuine, but his constant anger caused the show is not to be taken seriously. He usually gets trolled by all sorts of internet groups, and some listeners have created a cult following for him (resulting in this wiki, among other things). While the show was defunct from May 2012 to March 2016, it still garnered many views on YouTube, primarily portions from Radio Graffiti.

The show ended on November 14th, 2018 after nearly eight years of broadcasting. At the end of the year 2018, Ghost began broadcasting his new internet radio program, The Ghost Show.

When Ghost began the show in early 2008, the show was named True Conservative Radio. This show consisted of Ghost ranting about his conservative political views for about 2 hours. He would occasionally get callers who would usually disagree with him. As time went on the show became the focus of troll raids from sites like 4chan, Ebaumsworld and FunnyJunk. At the end of the third year of the program, Ghost took an extended break from early September 2010 to mid January 2011. When he return he announced a change in the shows program from True Conservative Radio to True Capitalist Radio as a result of Ghost's loss of faith in the conservative movement. The show also experienced a shift in focus from mainly politics to finance. The show also was now listened in the business section of BTR rather than political.

The show was formatted into three basic chunks. The first portion of the show was dedicated to Ghost discussing the markets. During the markets Ghost normally discussed each major stock entity (NYSE, NASDAQ, etc) along with commodities and futures (Brent Crude, Lean Hog, etc) This segment lasted about thirty minutes to a hour. Following this segment Ghost moved into the news section of his broadcast where he discussed stories and took phone calls. This section lasted from the end of the markets until the last half hour of the show. The final section of the show, and the most famous, was Radio Graffiti. This was a rapid-fire segment in which callers have a short time to say "whatever it was they want to say". The callers would use various methods of trolling, such as playing remixes, splices, or simply insulting Ghost, his family, Texas, or capitalism. Radio Graffiti typically lasted around 30 minutes, occasionally more when Ghost decided to extend it after 7pm. This was known as "after-show Radio Graffiti".

Ghost usually adds variety to the show in the form of various different characters. The most notable one is Ghost's employee; the Engineer. Other characters include Tyrone, one of Ghost's black friends, the Chinese Communist Mr. Fortune Cookie, and the easy-going Mr. Optimism. Ghost has done plenty of impressions, including Alex Jones and Bernie Sanders. Sometimes, Ghost's pet pooch Templeton will wander in on the air, usually to disrupt the broadcast.

For the full articles, see either Twitter Shoutouts or Chatroom Shoutouts.

Twitter shout-outs were a staple of the show since the True Conservative days of the program. In this segment of the show Ghost would repeat the name of random people who have either retweeted the first tweet on his account or tweeted at him. Ghost also would sometimes do Chatroom Shout-outs where he would read off each user name in the chatroom. Chatroom Shout-outs occurred on an irregular basis. The trolls used Shout-outs that made Ghost rage by either having him say things he doesn't agree with or read vile user names. User names often included graphic sexual acts, or insensitive references to celebrity deaths or natural disasters. Shout-outs usually ended with Ghost raging about those said "disgusting names". Shout-out groups include the Pooptickler family, Gimps, Communists, and Bronies.

On January 29, 2012, Ghost announced on his Twitter account that February would be his last month doing shows on BlogTalkRadio. This however turned out to be a lie, as Ghost was starting new broadcasts as of April, yet at a very spontaneous rate. Ghost was upset at the huge amount of doxing attempts against him, and expressed little interest in continuing the show through Spring.

In late May of 2012, Ghost decided to leave the show for good, following an incident on Twitter. He hosted a final Paltalk on June 1st, 2012, citing the reasons he hated the show, and that nobody took him seriously, and for a short time, even closed his Twitter account for about three weeks. From July to December, an unknown individual took over his account and posted occasional tweets, giving their opinions on the final weeks of the presidential election. In early December, a group of trolls flagged his hacked Twitter account for hate speech, and had it suspended. His alternate account was taken over by an unknown individual known only as 'FLAWC', but someone claiming to be Ghost briefly ran another alternate Twitter account before compromising an alternate account from FLAWC in late January.

While "he" had been making remarks on Twitter about starting the show again as early as September 2012, the events that have taken place have so far suggested that True Capitalist Radio remained defunct. Another individual claiming to be him had been rather inactive and stated several times that he wants to escape the "fandom" of the show and only do it for capitalists like himself.

Despite tweets from a Twitter account that was once thought belonged to Ghost that constantly promised a comeback show, the Gh0stP0litics Doxing Event has proven the falsehood of Ghost's supposed 'oldest' Twitter account, and it was assumed that Ghost did indeed quit the internet and it was believed he would never came back or do another show. This was the case until March 20th 2016, when Ghost did a 30 minute broadcast on BlogTalkRadio and announced that the show was going to continue in April of 2016.

On November 6th, 2015, after three years of inactivity, the actual Ghost updated his description to "This is True Capitalist Radio formerly known as True Conservative Radio program. Ghost tells it how it is and how it should be, call in to us... From Ghost: Finally got my BTR account back! Stay tuned and SPREAD IT AROUND LIKE WILDFIRE!" removing the Bitcoin address that had belonged to the hacker who controlled his account.

On November 12th 2015, Ghost uploaded a 2-part recording to YouTube and announced (eventually unfulfilled) plans to return to BlogTalkRadio for Christmas Eve & the Ghosties Awards if more people shared his show. This was the first time that anyone had heard from Ghost since his last Paltalk session in June 2012.

On March 20th, 2016, Ghost aired a 30 minute 'Emergency Broadcast' onto BlogTalkRadio calling upon the Capitalist Army to wage "digital war" and to "dox the GOP" in support of Donald Trump. He announced that he was going to return to BlogTalkRadio with full shows, the first of which being a Baller Friday broadcast, Episode 227.

Later, on May 8th 2017, Ghost put the show on indefinite hold due to being tired of doing a show 5 times a week, and now 6 days thanks to the introduction of TCR's sister show, The Saturday Night Troll Show. While he stated the show would return on July 4th, Ghost did not come back until October 31st, 2017, albeit only doing the show 3 times a week now.

In March 2017, due to some differences between Ghost and BlogTalkRadio, most notably BTR no longer paying Ghost for the show, Ghost decided to take another short break to broadcast independently from now on. Ghost currently hosts the show from ghost.report, and as of May 7th 2018, is regularly broadcasting again, 3 days a week. And also with the new broadcast, he stopped doing Radio Graffiti. But on June 8, 2018, he brought back the segment, thanks to people donating to his "Cryptocurrency Wishing Well". The next episode, he agreed to do Radio Graffiti for the whole week if his subscriber count on Gab reached 110 before 9PM that night. The goal was reached, and he did Radio Graffiti for that broadcast, and also stated he would do it for the rest of the week. However, on the next episode, Ghost announced that both Radio Graffiti and shoutouts will no longer be part of the show due to a lack of interest/donations, and also because he was tired to the type of people the segments were attracting.

At the end of Episode 637, Ghost suggested that he would do one more week of shows, but might keep on doing the broadcast if more people donated to the Crypto Wishing Well. On November 14, 2018, Ghost announced during the broadcast that he would be taking a break from the internet, and ended the show early at the start of the third hour, leaving the fate of TCR unknown.

On December 31st, 2018, Ghost hosted a livestream on YouTube known as The Ghost Show. On this replacement of TCR, Ghost announced that he would steer away from politics and bring back the interactive segements.