Ghost has a YouTube channel that he occasionally uses. Ghost often Tweets YouTube videos to his Twitter followers. The followers raid the video, disliking it and leaving harsh comments. Ghost has received several complaints from video uploaders about the misconduct of his fanbase, causing him to rage back at them during the broadcast. Ghost has uploaded a handful of capitalist-related videos.

Ghost holds a deep resentment for many popular professional YouTubers, most notably Markiplier (which he pronounces "Markipiler") and Pewdiepie (which he pronounces "poodie pie"). He believes that YouTubers are "talentless twats with bad lighting" and self-centered idiots, and often references the existence of YouTube channels who do mundane activities such as cutting things in half. Ghost is particullary pissed off with YouTubers because he sees them as a cause of the absolute "pussification" of modern male, the lack of talent that he thinks making videos takes and the "materialistic zombie idiot" fans that blindly follow these YouTubers. As a result, Ghost views YouTube as a contributing factor to Junkyard America. Comparing Ghost to popular YouTubers can elicit rage and rants from him. 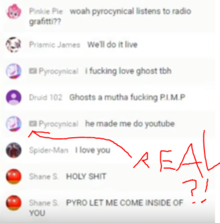 Screencap of Pyrocynical confessing to being a TCR listener, claiming it "made him do YouTube." (Image by 10centcapitalist)

After several popular YouTubers such as Boogie2988 and LeafyIsHere where hacked in June and July of 2016, Ghost reacted by stating that the said YouTubers deserved to get hacked and refused to confirm or deny if Capitalist Army had any involvement with the hackings.

During Radio Graffiti on Episode 297, someone played a splice involving YouTuber McJuggerNuggets (who is known for his "Psycho family" videos), causing Ghost to cans.wav and throw a tantrum over YouTubers, mainly JuggerNuggets and Boogie2988. Ghost went back on his comments towards JuggerNuggets in Episode 318, saying that he appreciates how he stated that all of his videos were staged and that he is encouraging his viewers to make their own content.

None of the YouTubers Ghost has mentioned seem to even know he exists. However, popular Leafy-clone Pyrocynical appeared in TheBronyNetwork's stream of the show during Capitalist Episode 358 and confirmed that he was a former listener of the show before Ghost's hiatus, while being surprised that he had not yet heard about the show's Return.

Boogie eventually came across one of Ghost's rants on him, laughing it off and calling Ghost out, which he took as a victory on his part. Upon hearing what Boogie said during Episode 555, Ghost didn't seem to care much, calling Boogie's "God's joke" and question why he gets to live despite being a fatass while more famous people pass away.

Ghost has also been critical of Youtube livestreams, specifically the "Internet Bloodsports" community and notable figures such as the Ralph Retort and Mister Metokur, causing TCR to wind up being played on the Ralph Retort, as well as Metokur to acknowledge Ghost in a positive manner. Ghost was grateful for Metokur's response, though continued to call him overrated.

YouTube has become the place where almost all new remixes, splices, and outtakes from Ghost's show have been uploaded, completely replacing the soundboards. DarkRazorZ has a popular YouTube channel that he formerly used to regularly upload best-of outtakes from Ghost's show, mostly radio graffiti and rage-quit calls. Since the Return though he has been busy, apparently, with military service and has not continued to upload.

YouTube has also been used to upload animations made in Gmod and Source Film Maker involving Ghost.

Ghost frequently rants about how he will get punitive damages "out of your ass" for uploading besmirching videos of him onto YouTube and other websites. He claims that he's contacted people and websites and that its "in the works". It has been at least six months since the original claims and nothing yet has happened to anyone.

Ghost allowed users to upload videos of themselves with his merchandise to prove that it arrived. He offered to follow them on Twitter until January the 8th for it.

There are various YouTubers who regularly and popularly upload videos of and relating to Ghost to YouTube. Among these include:

Retrieved from "https://truecapitalist.miraheze.org/w/index.php?title=YouTube&oldid=17663"
Categories:
Cookies help us deliver our services. By using our services, you agree to our use of cookies.