“Too bad your dumbass little 386SX Computer sucks the chrome off of a '57 Chevy bumper, BECAUSE WE COULDN'T UNDERSTAND YOUR ASS!”

—Ghost, replying to a caller whose phone failed. 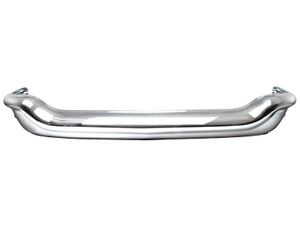 The bumper of a 1957 Chevrolet. Notice the abundant chrome.

Whenever a newcomer or someone with good intentions calls up the show with their microphone/telephone sounding glitched or broken, Ghost will often utter that it "sucks the chrome off of a '57 Chevy bumper". The term itself is a broad term to refer to trolls who fail due to technical issues on their end, a common happening on True Capitalist Radio.

On some occasions Ghost will use the term to refer to anything he dislikes, be it a political ideology, politician, or a news event that he had good expectations for, instead dropping out of his favor.

While the phrase isn't as popular as Shooting Pearls or Melting Pot of Friendship, it was still notable enough for minor troll Scull314, to create a splice of Ghost claiming that "Texas sucks the chrome off of a '57 Chevy bumper" (see below video) - in which it is used immediately after he utters the phrase out of pure coincidence, creating a great deal of anger.

Retrieved from "https://truecapitalist.miraheze.org/w/index.php?title=%2757_Chevy_Bumper&oldid=12752"
Categories:
Cookies help us deliver our services. By using our services, you agree to our use of cookies.