“When your grandkids talk about 'What were the Meme Wars like?', you can have those flashbacks of Pepe the Frog, Guac Bowl Merchant... I can go on and on for Christ's sake! SPIRIT COOKING!”

—Ghost, reflecting on the Meme Wars in Capitalist Episode 389

The Meme Wars a.k.a. Meme War I or The Great Meme War (or just 2016 Presidential Election for people outside the Internets) was an event, spanning from June 16th, 2015 to November 8, 2016, where the businessman and billionaire Donald Trump announced his Candidacy for the 2016 Presidential Election. Initially thought to be just a joke candidate by most political analysts, Trump took everyone by surprise when he unleashed the power of the Internets, Meme Magic and Weaponized Autism to secure his victory in the Republican Primaries. Conflict marked the first time in recorded history when Meme Magic was used to wage war in the political spectrum.

Ghost and the Capitalist Army prominently took part in The Meme Wars through various campaigns and operations. Ghost cites this as the primary reason why he made his return in 2016. The Meme Wars are the second known major conflict that Ghost has participated in, the first being the Vietnam War.

The Meme Wars ended in a decisive victory for the Trump Train when Donald Trump was elected President of the United States in November 2016 and became the first Meme President.

Donald Trump was planning to run for president twice before the 2016 elections but backed down both times, the first time in 2000 because the party he was running for was having internal struggles and the second time in 2008 because the birther theory that was his primary weapon against Barack Obama was labeled false. Trump officially announced that he was running for president on June 16th, 2015. He was initially one of the less popular candidates for president but after the first debate, his popularity saw meteoric rise as he completely wrecked the initial front-runner Jeb Bush with his showmanship and witty sense of humor.

Prior to the Meme Wars, Ghost had covered the two previous Presidential elections, dedicating airtime on True Conservative Radio to his distrust for John "Turncoat" McCain in 2008 and expressing his endorsement for Herman "Sugar" Cain during many 2011-2012 episodes of True Capitalist Radio. This sparked speculation that Ghost might make a return to broadcasting for the 2016 election, even though he was still in the midst of his infamous five-year absence during the election's earliest debates. This speculation was furthered by a two-part video posted to Ghost's YouTube account in late 2015 detailing all the things he was right about, and stating that he's considering potentially coming back.

Ghost placed an unprecedented importance on the 2016 Presidential Election due to the "Capitalist Revolution" which he claimed was embodied by the businessman and noteworthy anti-bureaucrat candidate Donald Trump. Ghost's Emergency Broadcast and eventual full-fledged return to regular episodes of True Capitalist Radio with Capitalist Episode 227 centered on Ghost using his own sphere of influence to inform his listeners and sway the populace to vote for Trump.

As Ghost collaborated with other Trump supporters within his own circle and elsewhere, he adopted the term "Meme Wars" to refer to the events of the election, in reference to the tactics used by the pro-Trump side: information campaigns, culture jamming and psyops utilizing memes to spread the good word of Trump. Ghost described the 2016 election as "the first time in world history when the internet has influenced the electorate".

Bemoaning the lack of leadership in the Meme Wars, Ghost declared himself the leader in Capitalist Episode 372, embracing the moniker "Ghostler" (previously used to troll him) and rolling out a new avatar to represent his ascension to the throne of the Trump Train. The catchphrases "HAIL GHOSTLER!" and "HAIL THE GHOSTLER YOUTH!" were commonly used by Ghost during the Meme Wars to spur the Capitalist Army into action.

Notable victories won by the Capitalist Army during the Meme Wars include informing the populace about Ted Cruz's sexual liaisons, spreading the word of Donald Trump via The Chalkening, discrediting Hillary Rotten Clinton with Operation: Barrel Roll and spreading awareness of Pizzagate. Notably, Ghost is quick to attribute these and other victories scored by the Trump voterbase entirely to his Capitalist Army alone, even though many of these movements were spearheaded by other forces within the movement such as /pol/ (with Ghost, TCR and its listeners acting merely as a single cog in a greater pro-Trump machine).

Ultimately, the Meme Wars ended in victory for Ghost and the Capitalist Army when Trump was elected President on November 8, 2016. Ghost held a special broadcast covering the election in real-time and a subsequent celebratory broadcast the following day.

Around this time, Ghost began selling merchandise commemorating the Meme Wars (see picture), stating repeatedly "IT'S A RELIC OF THE MEME WARS!". 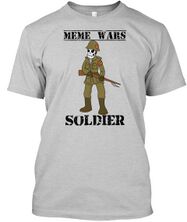 Meme Wars apparel sold at ghost.market for a limited time.

The Meme Wars coincided with an unusually productive year for True Capitalist Radio. While trolling was as abundant as ever, the election hype led to a disproportionate number of Serious Callers who would call in to the show to agree with Ghost or debate him. Episodes of True Capitalist Radio were discussed regularly on /pol/ and other political forums, exposing the show to new listeners with a genuine interest in politics.

In particular, the revelation that he could use his influence to induce political change left a profound impact on Ghost. Even prior trolls buried the hatchet with Ghost to join in on the effort to get Trump elected, as shown when the once-nefarious Tub Guy suggested the idea for The Chalkening.

Having returned to his show for the express purpose of getting Trump into office, Ghost threatened to end True Capitalist Radio if Hillary won the election, as the show would serve no purpose without a unified Trump voter base to enact political change. By continuing the show, Ghost seems to have believed he could continue using his influence to inform his listeners and advocate for their new leader well into the Trump administration. Unfortunately, for a short time, this turned out not to be the case.

In the months following Trump's victory and eventual inauguration as President, the hype that had followed him throughout the election among TCR listeners and others began to die down. Serious callers tapered off as trolling continued in full force, giving Ghost a sense of disillusionment with his fellow Trump supporters. He was especially disappointed by the number of Trump voters and alt-rightists who lost interest in politics and went back to their previous interests after the election was won, fueling Ghost's paranoia over anime due to its popularity with the alt-right. Throughout April and early May 2017, long-winded rants about how anime and cartoon fetishism among adults is destroying American society became an increasingly common topic on the show.

Ghost also expressed contempt for Trump voters among the libertarian right, alt-right and especially white nationalists who criticized Trump during his first 100 days in office, accusing them of dividing the supporter base. Ghost delivered a lengthy tirade on the Saturday Night Show Episode 9 directed at "disloyal" Trump supporters for criticizing President Trump's decision to bomb an Assad base in Syria, and especially at white nationalists for their perceived ignorance about international politics. 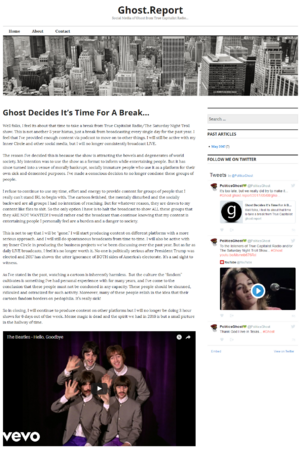 “But that all changed once Trump was elected President. The Alt-Right personalities showed that they were nothing more than attention whores. Meme soldiers went back to playing video games, watching cartoons or trolling for no good reason. Even 4chan’s /pol/ lost its luster by resorting back to /b/-like activity. It’s as if everyone on the Internet stopped being seriously political; as if it never happened.”

—Ghost, on the death of meme magic

Ultimately, Ghost decided to take a break from producing the True Capitalist Radio broadcast on May 8, 2017. Although fans have speculated that behind-the-scenes drama may have contributed to the decision to take a break, Ghost wrote multiple editorials (archives here and here) attributing the decision to the lack of unity in the Trump voter base as TCR listeners returned to their trolling and anime-watching ways, and his own disillusionment with being unable to enact serious political change as he had done in the Meme Wars.

Ghost's first special broadcast following The Break would draw attention to the need to reignite the spirit of the Meme Wars to combat the anti-Trump narrative being pushed by the media.

On Ghost's inaugural episode following The Break, he declared the dawn of Meme War II, to be fought in 2018. Ghost called upon the Capitalist Army to revive the spirit of 2016 in an effort to purge bureaucracy from American government in the 2018 elections. Ghost says that he doesn't care whether Republican or Democrat career politicians are ousted as long as common sense politicians and capitalists (in the vein of Donald Trump) are elected in their place, as career politicians are responsible for "getting us into this mess". Ghost has bemoaned the fact that representatives attempt to "make a career out of public service" and has repeatedly stated that even incompetent politicians would be better than the representatives we have now, as at least they wouldn't intentionally destroy the nation for their own gain. A common rallying cry is "We own these little people in Washington!".

Ghost's plan to remove bureaucrats from office in the 2018 elections reflects a common sentiment on the populist wing of the Republican Party that has been ascendant since the election of Donald Trump. In particular, Ghost's plan resembles the infamous "war" declared by Breitbart News editor-in-chief (and former Trump White House Chief Strategist) Steve Bannon on the Republican establishment; however, Ghost is critical of Bannon, especially following Bannon's comments that Donald Trump Jr. was "treasonous" for a meeting he held with Russians. Like Bannon, Ghost was a strong advocate of Roy Moore for Senate during the 2017 special election in Alabama, seeing Moore as a quintessential "anti-establishment" candidate due to his far-right views, advocacy for Trumpian politics, and outsider appeal. When Roy Moore became mired in sex scandals and ultimately lost the election, Ghost claimed he had been set up, comparing him to Herman "Sugar" Cain.

Ghost has continued to advocate for the ousting of bureaucrats from public office and the election of anti-establishment candidates in their place in nearly every episode following The Break. However, he has only used the term "Meme War II" once, in the aforementioned Episode 501. Nevertheless, Ghost's calls to action usually include an impassioned plea that his audience become "politically serious" and rekindle the spirit of 2016, showing that Ghost hopes to apply lessons learned from the previous Meme War as he prepares the Capitalist Army for the upcoming conflict.

Retrieved from "https://truecapitalist.miraheze.org/w/index.php?title=Meme_Wars&oldid=17054"
Categories:
Cookies help us deliver our services. By using our services, you agree to our use of cookies.