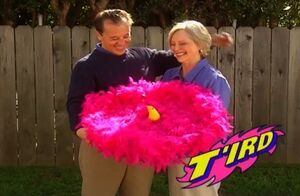 T'ird, just one of the many adverts played on Ghost's show.

Throughout the history of the True Capitalist Radio broadcast, the term "Advertisements" has meant different things. At one point during the summer of 2011, Ghost used advertisements for an STD firm to support the broadcast.

Callers have frequently advertised their own Blog Talk Radio shows as a method of trolling. During Episodes 221, 222, and 223, callers began playing advertisements for products unrelated to Ghost, from Newgrounds animations to Lots and Lots of Trains DVD's. Ghost claimed callers were "using [my] broadcast as a time for free adspace," though at the very first Radio Graffiti, Ghost stated that he would allow that. The high count of advertisers calling Ghost has inspired Twitter trolls to call Ghost a sellout.

Retrieved from "https://truecapitalist.miraheze.org/w/index.php?title=Advertisements&oldid=14408"
Categories:
Cookies help us deliver our services. By using our services, you agree to our use of cookies.