—Ghost, after being chain-called by the ABS for the first time 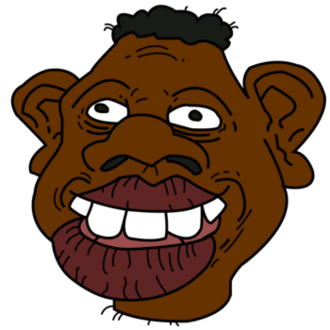 The African Booty Scratcher (sometimes abbreviated ABS) is the name given by Ghost to a former troll caller on True Capitalist Radio that he believed to be African because of his thick accent. Alternatively, he was commonly referred to as Ukraine Bro among /pol/acks because of his nationality. He initially started out as a chain-call troll, but eventually evolved into a full fledged character after the chain-calling started to wear out.

His first calls consisted of a soundbyte of him speaking in heavily accented English, while reading an erotic fan fiction of Anne Frank. Whilst considered by Ghost to be stupid on their own initially, it soon became much more annoying to him when people began chain-calling the show with the voice clip. Troll community had mixed opinions on these calls, with some praising them, while others felt like they were the worst trolling method in the show since Big Jack. On Episode 414, it was revealed that the African Booty Scratcher was actually Ukrainian, instead of African as initially believed, but he nonetheless rolled with his given name and acted as if he was African in his future calls. His origins are therefore similar to those of Tub Guy, who also began as a failtroll before becoming successful with a persona inspired by Ghost mishearing his call.

After the Anne Frank fan fiction calls started getting old, the ABS moved into making himself a regularly appearing character in the show with splices, such as him selling Ghost and Donald Trump Big Smoke's order, having his way with Ghost's Wife, and doing a parody of Mr. Fortune Cookie's usual speeches. These calls were generally much better received by the community than his previous attempts at trolling, as there haven't been many new characters in the show nowadays besides Tub Guy, Germit the Gay Frog, and Eeyore.

During Episode 443, Ghost was surprised and enraged when he found out that there was a Kickstarter for a TV show called African Booty Scratcher. Ghost reacted to this by among other things by threatening to send the ABS TV show an invoice, wondering if meme magic was real, and thinking if he should now go to Africa since he had somehow managed to make a TV series out of a joke.

The African Booty Scratcher was one of the many people to return when Ghost came back from the Break, but his calls have became less frequent, due to the new timeslot for the show (6:30 PM CST instead of 4 PM CST), and also Ghost not calling on anonymous people as much, as well as hanging up on anonymous callers whenever a Cleveland Show call came on. Despite this, he did a few trolls, such as a rendition of "Thriller" in Episode 503, and two collab splices with J-Man: one being a mock advertisement for the "Aluminum Falls Retirement Home", and another being an intro parody.

ABS made an appearance in Ghost Show episode 9 but remained inactive for most other episodes. A troll was called out for replaying past splices of his in episode 12, and J-Man did a convincing impression of him in episode 56. He did the impression again under the name Tyrone while doing his Granny calls.

J-Man claims the real African Booty Scratcher made a cameo in the Moskau collab, alongside Jackler, Tub Guy, Germit and Granny in Episode 100.

Retrieved from "https://truecapitalist.miraheze.org/w/index.php?title=African_Booty_Scratcher&oldid=17988"
Categories:
Cookies help us deliver our services. By using our services, you agree to our use of cookies.