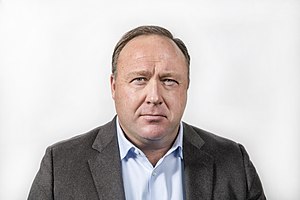 Alex Jones is a radio host out of Austin, Texas (Ghost's hometown). His show, Info Wars, centers around conspiracy theories. Alex is known for advocating the New World Order and 9/11 conspiracies. He is strongly disliked, and even hated by Ghost, the host of True Capitalist Radio. Ghost often refers to Alex Jones as a "hambone" and his followers as "Alex Jones Worshipers".

Despite Ghost being highly critical of most stories and theories Alex Jones supports, Ghost himself denies the moon landing.

During Ghost's broadcast, any mention of Jones' name would put him into a fit, sometimes complaining that 'Alex Jones and Howard Stern listeners were "trying to 'siphon' the tens of thousands of listeners I have on the show, throughout the world". The irony is that Alex Jones has never made mention of Ghost even one time on his Infowars/PrisonPlanet page, let alone acknowledge Ghost's BTR show in any form whatsoever (However, he has by possible coincidence used the term Radio Graffiti once, in which Ghost reacted in great annoyance on Twitter.)

However, one moment of Alex Jones possibly stealing ideas from Ghost is when Alex Jones said "Come on little piggy, let me hear you squeal! Eeee!", which was similar to something Ghost occasionally does to troll callers, "Squeal like a pig, boy! Squeal like a pig! Wee! Wee!". Upon hearing this, it made Ghost cans.wav and threaten to contact his lawyers. To support this, it's known that Alex Jones at least knows about Ghost and True Capitalist Radio and has listened to some of his 2011-2012 episodes. However, Jones seems to be unaware about Ghost's return as of yet.

Because of Alex Jones's notoriety (and Ghost's strong dislike of him), Alex Jones has spawned a series of trolls.

During the summer of 2011, a troll known as the "NWO Shill Guy" became a regular caller during Radio Graffiti. A link to his first call is found here. Whenever else he'd call in, Ghost would shout "Get 'im off!" and "I thought you were supposed to be screening these callers, Engineer!" He has inspired several short-lived copy-cat trolls since.

Another troll inspired by Alex Jones consists of referring to Ghost as a "Reptilian shape-shifter."

In Episode 203, a caller played a splice of Ghost calling another broadcast, where the host then confused him with Alex Jones. This sent Ghost into a 7 minute rage about being compared to Alex Jones and an eventual Rage Quit.

Simply saying 'InfoWars.com' will cause Ghost to kick you off the air, and rage at the amount of 'Alex Jones worshipers' that infest his broadcast.

Upon Ghost's return in 2016, he claimed that while he does not agree with Alex Jones, he's one of the few people supporting Trump and that in this case, as extreme as he says things are, 'an enemy of my enemy is my friend' and that he's willing to cut some slack for the man. The true extent of these differences in opinion is questionable, given that Ghost himself is now heavily invested in conspiracy theories, including some that Jones has also discussed.

However, as (re)established in Episode 286, Ghost still believes Alex Jones is a "damn ripoff" listens in to his broadcast and steals his ideas, and does not want callers to discuss Alex Jones or compare the two hosts. The extent of his outrage about Jones in this episode, however, was likely influenced by a sexually explicit splice about both of them that provoked the rant.

Ghost continues to believe that Alex Jones habitually listens in to True Capitalist Radio to steal Ghost's ideas. He has cited "evidence" like a tweet from Jones about Donald Trump taking Hillary Clinton "out to the woodshed" and becomes extremely angry when mentioning Jones' supposed theft.

After it was announced that Infowars was hiring for a new Radio host, Ghost began practically begging them for the job, as that means he could move back to Austin from San Antonio.

On New Year's Eve during the Ghosties (the first in five years), Ghost would be outraged after a caller informed him that Alex had started his own awards show on New Year's Eve, causing Ghost to say that he ripped off him and threatened to send him an invoice.

Ghost once again began distancing himself with Jones after the Trump campaign was over and he had no reason to support most of his views anymore (though he still shares the occasional Pizzagate newspiece from InfoWars on Twitter/Gab from time to time. When Ghost found out that Jones had been working with the Russian ultra-nationalist leader Aleksandr Dugin and defended himself in a court case by saying that his radio persona was an act, he lost what little respect he still had for Jones.

On Episode 554, Twilie Atkins played a splice of Alex calling out Ghost. Ghost believed that Alex actually said that and declared war against him. Ghost's "war" on Alex did not happen, and the latter possibly knew that it was a splice and played along with it.

Retrieved from "https://truecapitalist.miraheze.org/w/index.php?title=Alex_Jones&oldid=18694"
Categories:
Cookies help us deliver our services. By using our services, you agree to our use of cookies.