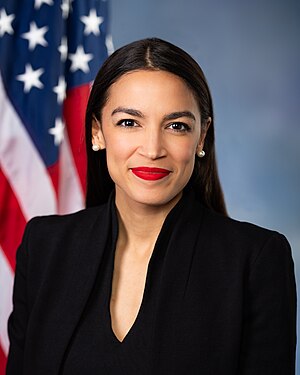 Alexandria Ocasio-Cortez (born October 13, 1989), also known by her initialism of AOC, is a member of the House of Representatives, representing the 14th District of New York. A member of the Democratic Party, she supported Bernie Sanders during the 2016 United States Presidential Elections.

Ghost has routinely ridiculed Ocasio-Cortez during her run as House of Representatives during both True Capitalist Radio and The Ghost Show. Ocasio-Cortez identifying herself as a Democratic Socialist made her an easy target, as she has criticized Capitalism during her run for the house and as a member of the House of Representatives. Given that she's considered a Millennial, he sees her as everything wrong about Millennials: spoiled, hypocritical, egotistical and coddled. Ghost also wrote an article about her on ghost.report covering Ocasio-Cortez as the poster child of ego and ignorance.[1] His criticism of her intensified when she suggested the "Green New Deal" in January 2019 to lower energy use and to combat climate change, which he ridiculed the concept during one episode of The Ghost Show.

On Episode 42 of the Ghost Show, Ghost ridiculed Ocasio-Cortez's Instagram video session, which was mirrored on the Daily Caller. He spent the whole time mocking the video, saying it was "sad and pathetic" that she was alone on a Friday night, questioning where her boyfriend, talking to "a bunch of losers" on the Instagram app. He even told her to shut up a couple times while she was talking, and called her "a drunkard broad." Streamshare donors during the segment commented on how it was cringeworthy and another commented if she ate paint chips.

Retrieved from "https://truecapitalist.miraheze.org/w/index.php?title=Alexandria_Ocasio-Cortez&oldid=15487"
Categories:
Cookies help us deliver our services. By using our services, you agree to our use of cookies.