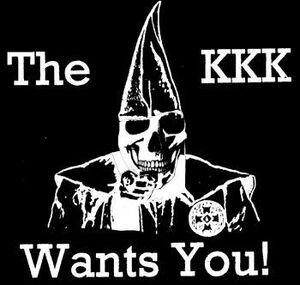 One of Ghost's possible pastimes.

“I know you idiots want to insinuate that I'm some kind of Grand-Dragon or something, but I'm a melting pot of friendship and you idiots know it. YOU IDIOTS KNOW IT!”

Ghost has frequently been called a racist. Ghost's enjoyment of the "Guess the Minority" game and his "special guests" have lent credence to this idea, rapidly increasing the number of accusers over time.

Calling Ghost a racist was one of the most frequently used trolls on the True Capitalist Radio broadcast in its original run. As a result, Ghost played "Guess the Minority" much less often, as it has died down a little bit and been replaced by more trolls before it ended in May 2012.

Several of the biggest remixers of Ghost ranging from DJ AlexS. to Celtic Brony have included spliced audio clips of Ghost claiming to be a racist.

It is often suggested that all residents of Texas are racist redneck cowboys, especially towards African-Americans.

(Wondering why you're not getting anywhere with calling Ghost a racist every time you call in? We have the perfect article to help you through this tough, frustrating time.)

After Ghost returned in 2016, the "you're racist" calls have all but died out. Callers went back to splicing him to look like a racist, such as using his Woodshed segment to racist degrees, often with stereotypical chimpanzee noises playing. These splices were almost guaranteed a cans.wav reaction from Ghost.

In Episode 342, someone played a splice of Ghost having sex with Leslie Jones. While Ghost was already enraged enough by it, he was even more angry at the fact that Leslie was represented by chimpanzee sounds. After The Break, people began to use chimp sounds in splices more often, almost always getting a cans.wav reaction from Ghost.

A main form of trolling during Shoutouts is making names that would make Ghost say something that sounds like the n-word. While some he would refuse to say, most have tricked him into saying it and causing cans, some of the more successful ones he didn't get as soon as he read them, but eventually noticed that and raged. Click here for a list of these names.

Following Ghost's departure from BlogTalkRadio, Ghost has used more slurs in his vocabulary, and has actually said the n-word without being tricked into or being spliced saying it, however he still denies any allegations of racism, stating he did not say it in a derogatory way and used it in reference to another news story (he also felt that it was okay to say it since he is no longer on BTR). This did not deter trolls while Shoutouts was still a segment from making jokes about it, leading to Ghost's usual reaction to these allegations.

Retrieved from "https://truecapitalist.miraheze.org/w/index.php?title=Allegations_of_Racism&oldid=14710"
Category:
Cookies help us deliver our services. By using our services, you agree to our use of cookies.