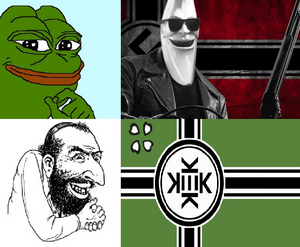 Some of the many memes that are often associated with Alt-Right. From top left: Pepe The Frog, Moon Man, The Happy Merchant and Kekistan

The Alt-Right is a controversial political far-right ideology that gained mainstream attention during the successful election of Donald Trump in 2016. While the ideology behind the movement is somewhat ill-defined and views between Alt-Righters vary greatly, Alt-Right is commonly described as a fascist, isolationist, protectionist, antisemitic and white supremacist ideology.

Ghost has been extremely critical of the Alt-Right, particularly the White Nationalists on Gab who have called him out. Beginning with Episode 441, he has frequently called them out, both within his show and on different social media outlets. Ghost sees the Alt-Right as a group of closet communists and Russia supporters who try to use their White Nationalism to hide their true commie ways. Moreover, on that episode, he revealed the link between Richard Spencer and Russian philosopher/political analyst Aleksandr Dugin, whose primary goal is to create chaos within the American political system.

Ghost vs. the Alt-Right

Ghost spent a significant portion of his 10 year anniversary show criticizing white nationalism and alt-right after Christopher Cantwell made a Gab post stating that he'd rather live under socialism than Jew capitalism. Ghost saw this post on Gab as a definitive proof that the Alt-Right and white nationalism were actually driving the same agenda as Antifa, and went on a lengthy soliloquy about the essence of what socialism/communism is.

After the show was over, a white nationalist identitarian going by the name Azzmador and several other white nationalists/alt-righters attacked Ghost on Gab for his statements during the show. Azzmador would go on to call Ghost a gay degenerate Alex Jones ripoff who was too wasted to conduct a proper broadcast. Ghost, on the other hand, would call Azzmador a socialist hambone who hadn't seen his penis in years.

After Episode 531 was over, Ghost had clashed with Azzmador and other Alt-Right aligned users on Gab. He even tried to set up an episode trying to call them out on his show. However, nothing came of it.

Despite his animosity towards the Alt-Right, Ghost had reposted news articles from the /pol/ News Network Gab account when he had an account on there.

Notable people associated with the Alt-Right

Retrieved from "https://truecapitalist.miraheze.org/w/index.php?title=Alt-Right&oldid=13759"
Categories:
Cookies help us deliver our services. By using our services, you agree to our use of cookies.