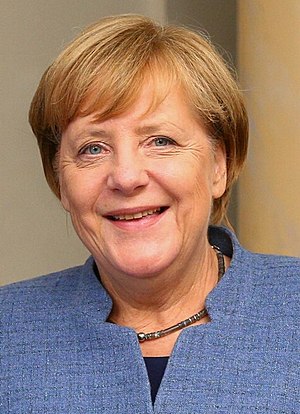 Angela Merkel is a German politician and former research scientist. She has been the chancellor of Germany since 2005.

Ghost has been frequently critical about Merkel, because of her unsuccessful attempts (and lack thereof) at stopping the ongoing migrant crisis, laws and acts that breach freedom of speech such as prosecuting people for anti-migrant and anti-Islam comments and her being a woman in power. Because of this, Ghost has frequently encouraged Germans to throw her out of power.

Ghost also uses Angela Merkel as a prime example against the feminist notion that if women were in power, the world would be a better place. She was lambasted by Ghost for the lack of action from her and the German government handled ISIS attacks that occurred in several German cities during the second half of 2016.

Retrieved from "https://truecapitalist.miraheze.org/w/index.php?title=Angela_Merkel&oldid=14881"
Categories:
Cookies help us deliver our services. By using our services, you agree to our use of cookies.