Asho, also known as Ashhole, is a an occasional troll and Serious Caller on Ghost's True Capitalist Radio Broadcast, pretending to be an abused Mexican child. Asho's mother is often speculated to be looking for Alabama blacksnake at happy hour, as Asho has claimed during numerous calls to be left alone in the house. His mother's efforts have apparently paid off, as Asho recently claimed that she was impregnated by a rich black man.

Asho tends to call Ghost using many different area codes, which has caused Ghost to trigger cans.wav. He claims to have nine different numbers. 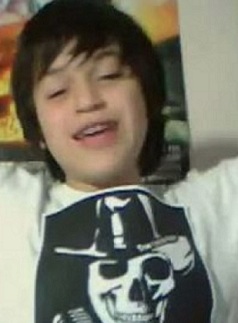 Asho shows off his TCR shirt.

In Episode 204, Asho called Ghost, saying that he believed he was becoming a Brony. Later on, during the same episode's Radio Graffiti, Asho was revealed to be at Suspicious Tumbleweed's house, where she was babysitting him. Upon finding out, Ghost was driven to trigger cans.wav once again.

He once called in claiming to have become a brony. Ghost went into conniptions at hearing this claim, and went on a long, semi-intelligible rant, in which he claimed that "[Asho]'s gonna have a bean-n-cheese cutie mark!". Asho was almost certainly trolling with this statement, knowing of Ghost's hatred of bronies, and to that end it was quite successful.

Ghost's reactions to Asho are similar to that of other young trolls, often blaming the parents (shouting "Where are the parents?!"). He refers to Asho as being eight years old in spite of the fact that Asho himself claims to be 14.

Near the end of TCR's original run, Ghost usually just dismissed Asho, often calling him a "Justin Bieber Bean 'n' Cheese having Mexican kid" (Justin Bieber's hairstyle is similar to Asho's) and sometimes telling him to "go and chew on a rubber tortilla", like he does with most Mexican callers.

Asho's greatest moments on the broadcast (before the Return) include a two-day troll in which Ghost created Save Ashhole Wednesday (Tuesday-Wednesday, November 1st-2nd 2011). Asho's troll began with him telling Ghost how he was recently abused by his parents. Ghost made a plan to intervene by calling Child Protective Services whenever he received the next call from Asho. Unfortunately, this was all revealed to be an elaborate troll during the next Radio Graffiti due to Asho's refusal to give his mother the phone. In the end, Ghost got mad as usual and hung up on the kid.

After Ghost came back in 2016, Asho began calling in again, now 19 years old and in his second year at college, studying computer science. Asho's first call was met with denial by Ghost who did not believe that 'an eight year old Mexican kid' could now be a 19 year old in college. Asho is now a serious caller who occasionally has full length, serious discussions with Ghost about culture (being Mexican), politics and other topics. They have since become friends.

Ghost seems to see Asho from almost a fatherly perspective and has even offered to take him out for drinks at some point when he turns 21. During Capitalist Episode 272 Asho thanked Ghost for being 'the fatherly influence I never had' and then restated that he was serious and not trolling.

In October 2016, Asho went back to his trolling ways by bootlegging Ghost's autographs, and mass producing Ghost's autographs by copying them. Ghost got pissed over this and called Asho an "Indian Giver," losing a lot of respect for him. Asho has since infrequently called in stating he would bootleg Ghost's autograph, and more recently became a Stumbling Mumbling Jerk Dick after huffing too much paint at the suggestion of Distilling Capitalist.

During Episode 379, Teutonic Plague said something regarding killing dogs on Twitter due to the incident with Templeton biting Ghost two episodes ago, and Asho tried to defend Templeton, only for Teutonic to block him. Asho then called in during Radio Graffiti to tell Ghost what happened, and Ghost brought Teutonic on the air as well to discuss it. Teutonic did admit to having said such things, but also began yelling at Asho for no reason, and presumably because he said that he would bootleg the autographs, which made it somewhat difficult for Asho to talk with Ghost. Asho then just decided to hang up seeing how he wasn't getting anywhere with Teutonic, but before hanging up, he asked Ghost to ban Teutonic from the show.

Asho called in again on Episode 380, now angry with Teutonic. Teutonic then called in again, saying that he's sorry to both Ghost and Templeton for what he said and that he wants everyone to just forget about the events of yesterday's broadcast, even though that people on Twitter started a #BanTeutonic movement.

Ghost brought Teutonic on the air again in Episode 381 to speak with various callers. Asho called up saying that people were calling Teutonic racist for having called the former a "dirty Mexican". Teutonic pretended that he never said that, but eventually started to insult Asho again, who then just hung up.

Asho joined Ghost's Inner Circle at some point in 2016 as could be seen from Ghost's former Twitter account where he had followed him. Asho was present in the leaked first Inner Circle meeting. He was kicked out on October 3rd, 2017 supposedly after he called Ghost crazy for believing the 2017 Las Vegas Shooting was a false flag, however it was later revealed in a call to Ghost's crypto hotline during the show in January 2018 that it was because his brother had been annoying Inner Circle members in the voice chat.

Retrieved from "https://truecapitalist.miraheze.org/w/index.php?title=Asho&oldid=18636"
Categories:
Cookies help us deliver our services. By using our services, you agree to our use of cookies.