“IS THIS THAT KID?! WHERE ARE THE FUCKING PARENTS??” 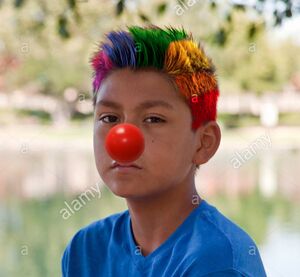 Asrielkekker is a fourteen-year old failtroll who called in during The Ghost Show-era Radio Graffiti segments, beginning in Episode 39. His character was similar to Asho and The Aborted Fetus in the 2011-12 era of True Capitalist Radio, calling in to make fun of Ghost, saying vile things that a child shouldn't be saying, and usually stating that his mom is with her guy friends when Ghost asks him to put his parents on the line. On Episode 50, Asrielkekker states that his dad is passed out with his "guy friend" and his mom is outside with her "guy friends". Ghost's typical reaction to his calls is utter disgust towards a child showcasing such behavior, copious amounts of cans.wav and profanity, and angrily shouting "WHERE ARE THE PARENTS?!". Asriel was also a member of the Outer Circle, but he was kicked out after a rule was implemented on the group that members have to be 18 years or older.

Asriel is usually praised for his successful troll calls with similarity to the underage callers of the original TCR era, earning him the nickname "Asho 2.0". On the other hand, some trolls, mainly those in the Outer Circle, view Asriel as a failtroll, because of him recycling old gimmicks used by Asho. However, Asriel states that he is not copying Asho, and did not know about him when he first started calling in. Eventually enough, Asho himself started to team up with Asriel, causing Ghost to accuse the former of being a bad influence.

With Ghost moving to VaughnLIVE, Kekker was banned from the chatroom and Ghost almost instantly hangs up on him while also cutting any calls including him from the BitChute uploads of the episodes. Despite this, Kekker still makes appearances on rare occasions, but these usually result in Ghost hanging up on him. Asriel was a member of the ghost.report forum before it was taken down, and stated that he doesn't call in anymore due to how late Ghost's broadcast comes on.

He is also not to be confused with Asriel.

Retrieved from "https://truecapitalist.miraheze.org/w/index.php?title=Asrielkekker&oldid=19995"
Categories:
Cookies help us deliver our services. By using our services, you agree to our use of cookies.