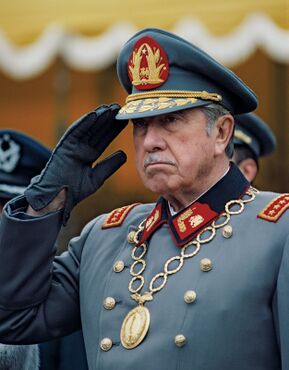 Augusto José Ramón Pinochet Ugarte (1919-2006) was the former military dictator of Chile. He ruled the country from his coup in 1973 to 1990 when he lost a democratic presidential election against the Christian Democrat candidate Patricio Aylwin. During his regime a group of Chilean economists called "Chicago Boys" trained by Milton Friedman were put in charge of Chilean economy and were later credited by some people for the Miracle of Chile where the country became one of South America's most successful economies (the miracle actually happened after Chile returned to democracy and during Pinochet's regime the county's GDP was lacking behind the South American average). However Pinochet is also remembered for many human rights violations that happened under his regime. Freedom of speech and political opposition was actively suppressed (it's important to note that this was already happening under his Marxist predecessor Salvador Alende's rule), about 1200-3200 people were killed, 80'000 were imprisoned and 60'000 were tortured under his regime. Most (in)famously he applied a method of killing against political prisoners where they were thrown into large bodies of water or on hard ground from a helicopter flying at high altitude which would later dubbed "Free Helicopter Rides" by /pol/. 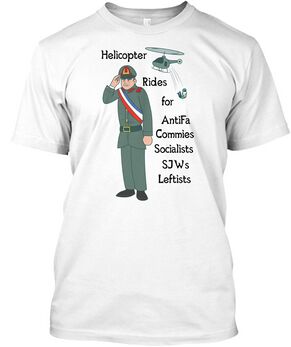 Ghost, despite his anti-authoritarian views admires Pinochet and sees him as one of the greatest South-American leaders of all time and credits him for saving the country from both communism and financial collapse. Ghost has also insisted that the targets of the killings and torture that happened under Pinochet's were all "Leftists and hippies who deserve to die anyways" and he earnestly believes that Pinochet was above all motivated by patriotism and loyalty to his country. In Capitalist Episode 131 he even went as far as to call Chileans "ungrateful" for hating on Pinochet during protests that were going on during that time.

Ghost's admiration toward Pinochet is so great that he positively reacted to seeing the Twitter name True Pinochet Radio citing that "we really need that" and even selling his own Pinochet merchandise at ghost.market. After the loss of Templeton, Ghost later got a new dog and named him after Pinochet.

Retrieved from "https://truecapitalist.miraheze.org/w/index.php?title=Augusto_Pinochet&oldid=19364"
Categories:
Cookies help us deliver our services. By using our services, you agree to our use of cookies.