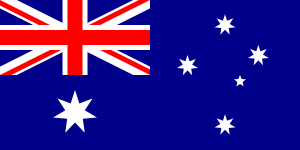 Australia is both a country and a continent, located in the southern Pacific Ocean south of Indonesia and west of New Zealand. It is home to Distilling Capitalist and InsaneEnergy. Ghost heard from Distilling that the country had brought in refugees from the Middle East. Ghost usually exclaims that he has a lot of listeners in Australia.

In September 2011, the country got in the news for allowing a third gender in the passports. This began a short-lived special guest on the show where Ghost impersonated The Crocodile Hunter. The character in question would look if the person was a biological female or a transgender. Moreover, there were Twitter names in the same month who made fun of Steve Irwin's death, which happened five years ago (at the time) in 2006, after he was filming a stingray that fatally stabbed him in the chest. The names returned in full force on The Ghost Show Episode 24 in which was Irwin's birthday, with stream shares causing Ghost to cans.wav at.

Retrieved from "https://truecapitalist.miraheze.org/w/index.php?title=Australia&oldid=15355"
Categories:
Cookies help us deliver our services. By using our services, you agree to our use of cookies.