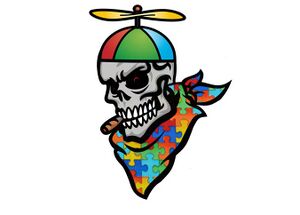 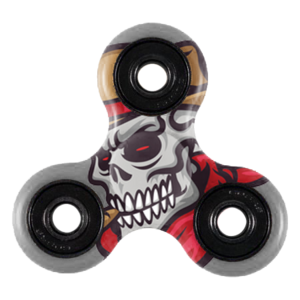 Ghost's avatar on a fidget spinner, presented to him during Episode 524.

Ghost is very critical of people with autism, and ranted about it multiple times beginning around late 2017 after his break, which became tiring for his listeners having to hear Ghost rant about the same subject repeatedly. Around returning from the Break, Ghost began ranting about autism more, and his rage towards it increased in December 2017, having gone on a near hour and a half long rant on it during Capitalist Episode 522. Three episodes earlier, in Episode 519, Ghost went on a long-winded rant over autism, and then took calls so his listeners can "hear the autism". This resulted in a Radio Graffiti-type session where multiple people trolled him. Ghost usually believes that all of the trolls that call his shows are autistic, and he usually associates bronies with autism. He believes people with Autism and Asperger's were a contributing factor in Junkyard America.

Despite being strongly against autism, Ghost used to be quite supportive of people with autism, and he has supported three former serious callers, KaraszKun, G and Teutonic Plague, all of whom had either autism or Asperger's Syndrome, but they eventually began to have problems with Ghost and got banned from the show for different reasons. G was banned after The G Suicide Hoax Incident where Ghost found out that he had made false suicide threats after he was revealed to be behind the Toilet Guy failtroll persona. Teutonic, on the other hand, was banned from the show in October 2016 by demand from many listeners, and revealed himself to be a brony. A month later, Teutonic returned as a troll, prompting Ghost to start calling him the "Autistic Plague". As for KaraszKun, he began trolling Ghost around late 2016, although Ghost passed this off as him just messing around. However, Ghost got word during Episode 509 that Karasz was making death threats towards him due to his stance on Net Neutrality. Ghost tried to call him a couple times, but failed. About a month later during Episode 520, Ghost directed some of his rants on autism towards KaraszKun, saying that he should be kicked out of his home and forced to get a job. Despite all this, Ghost and Karasz were shown during Episode 600 to be back on good terms. Aside from that, it's likely that, as a result of these experiences with these people, Ghost's opinion of autism and autists has soured considerably.

Following the end of the 2018 midterm elections, Ghost used this term against Generation Z during his last few broadcasts before taking a break from the internet.

On Episode 441, after Eeyore/Striver was kicked out of the Inner Circle for not being able to use a credit card on eBay and being "under the age of 20," people on Twitter claimed to Ghost that Eeyore was autistic. Instead of taking that as sympathy, he further went on a rant on people who used autism as an excuse for their stupid behavior and being no different from welfare moochers.

During Episode 443, Ghost announced the Inner Circle Short Bus, an alternative form of the Inner Circle for all the people who were bothering other IC members, such as Eeyore / Striver, the 727 Caller, and Godzilla3709. This, of course, led to various trolls, such as people praising their placement on the Short Bus like it was a "badge of honor", making Ghost irate as it wasn't supposed to be a good thing, and many splices as well, such as Eeyore running over Ghost with the Short Bus, and splices by 8Equal and the African Booty Scratcher of a cartoon Ghost being on the Short Bus. There have also been a few trolls who have insisted that RaidenSnake is on the Short Bus, much to Raiden's dismay.

Manchild America and the Anti-Manchild Rising

After returning from the Break, Ghost coined the term "Manchild America", where he viewed the people who are Bronies and anime watchers as manchildren. Around the time of Mother's Day 2018, the Inner Circle and members of the TCR Chatroom started a movement that would become the Anti-Manchild Uprising, turning into, in Ghost's own words, an "angry mob" over people within the chatroom that are a part of these groups.

During Episode 570, Ghost declared a final straw for "autists" following drama with former IC member Oflameo. Although Oflameo has neither confirmed or denied this, Ghost claimed on the broadcast he was an autist that didn't know how to speak very well on the voice chat. Over months of trying to talk to him and helping him out, drama started to develop between him and people in the IC as well as the TCR Chat. Some time after he got kicked out of the Inner Circle, supposed screenshots of him in another chatroom revealed he was calling them out and trying to dox Ghost. Ghost eventually called Oflameo live on the air asking for an explanation. Oflameo claimed he was acting like a socialist who was organizing school shootings and murders. After over 30 minutes of poor explanations and Ghost going off on Oflameo, and even going as far as saying that he is the reason why autists should be put on a list, the former hung up the call and renounced the latter's Ghostie award for Best Black Guy.

Retrieved from "https://truecapitalist.miraheze.org/w/index.php?title=Autism&oldid=17670"
Categories:
Cookies help us deliver our services. By using our services, you agree to our use of cookies.