“Wait a minute, your area code is 210. You ARE in Texas numbnuts, what the hell is your problem?” 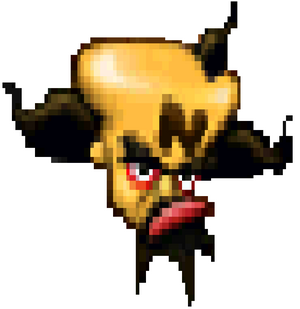 His current avatar, which is N. Cortex from the Crash Bandicoot series.

Pylons was a return-era splicer/remixer that started by supplying splices/remixes, but has also started using them on Radio Graffiti later on. His calls usually started with 210 in pre-late 2017.

Originally listening to TCR since the days when 4chan raided Ghost's show around 2010-2012, Pylons wanted to troll Ghost. This came much later after Ghost had returned back in March 2016 that he'd realize that he could troll him. He started to supply splices on the old TCR Wiki in which he made the now infamous intro remixes by creating "True Racist Radio" and creating intro templates so more Trolls can make intro remixes easily.

During April 2017, Pylons made a decision to start trolling Ghost after wanting to give a shot at trolling Ghost directly. His infamous call during the 5th anniversary of the Fuck You Texas Raid in which Ghost got irate from the call. Ghost realized a fellow Texan trolled him with the infamous song, saying to Pylons "Your area code is 210, you are in Texas numbnuts, what's your problem?". Pylons later laughed at Ghost continuing to enrage him and later told him that he lives in Texas and not to "besmirch it". His first cans from Ghost was playing a "Ghost and Teutonic Sitting in a Tree' splice which infuriated Ghost. During the days of MaskedPony, he made a splice of Maskedpony being put in a gas chamber by Moonman. This splice would make Ghost disgusted and have Maskedpony later calling upset by the splice. Besides making splices/remixes, he has even recorded how many times Ghost threw cans for each broadcast. Even creating a Cans High Score page on this wiki. Pylons recently played a remix of Templeton barking the Soviet anthem during Episode 324 to coincide with Obama's birthday that made Ghost rage quit during Radio Graffiti's third hour. He also made a Stevie Ray Vaughn splice that made Ghost instantly irate during the end of the live show part of Radio Graffiti on Episode 331.

After the show of Episode 445, Tubguy, him, and Topbadge thought of making a remix of the Magic School Bus and the Inner Circle Short Bus. The Magic Short Bus would be made and played on Episode 446 with 8Equal performing the remix. Many cans were thrown after Tubguy had Ghost click the link and ended the broadcast in a tirade.

2017-18: The Achievement Towards a Hard Earned Ghostie and Dealing With TCR's Decline

After improving his call quality at the end of 2017, Pylons made many notable trolls such as editing Alex Jones on Ghost's avatar on Gab, Ghost having sex with his car, and a DBZ splice of Ghost fighting Alex Jones. His mark towards a Ghostie after co-winning the Best Audio Splice Ghostie during the 2017 Ghosties. Due to a power struggle between the Official TCR Discord and La Casa De Trolls, making a rare occurrence of two winners of a Ghostie after a tie in votes with 8Equal. Following the decay of TCR, Pylons shifted towards leaving Discord after conflicts in La Casa De Trolls made him decide to quit. TCR's decay after Ghost going independent in mid-2018 marked the end of his trolling chances.

Pylons' Return on The Ghost Show

Pylons returned on the 9th Episode of The Ghost Show during the late part of Radio Graffiti. He played a splice of Ghost claiming that his wife on the show as a prostitute and porn star who had sex with Donald Trump, and didn't care that she had sex with Trump. Not surprisingly, this resulted in cans.wav. Throughout the years of TGS, Pylons made various splices ranging from Jojo's Bizarre Adventure related splices such as Ghost as Yoshikage Kira blowing up women on Episode 52 and Ghost attempting (and failing) to kill Dio Brando. To various splices of Ghost being racist, perverted, and committing violence which lead to receiving an honorable mention at the 2019 Ghosties for Best Splicer. Finally around 2020 on Episode 136, Pylons helped bring back a brief return of the Half a Tard Ghost splices. With a splice of Ghost rambling about peaches and Mr. Pibb soda. After this episode, Pylons decided to retire after realizing how late The Ghost Show aired. With the show's time cutting into his sleep schedule. Along with seeing how The Ghost Show has degraded due to the many donations extending the show With little to no Radio Graffiti airing rarely, unlike back in the True Capitalist Radio days. 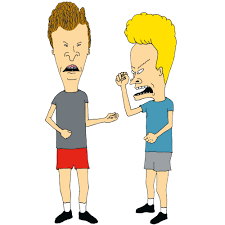 Beavis and Butthead are two characters from the MTV show of the same name voiced by Pylons. They debuted on Episode 407 in which they would call on making fun of Ghost for making pony merchandise for the Bronies. Ghost would be irate instantly and said that "the deal is a deal".

On Episode 425, they were in a cluster call doing a Order call. They later fought each other and mocked Ghost when he made Goat and cow sounds saying that his wife was on. He eventually ended the characters after lack of interest moments after.

Retrieved from "https://truecapitalist.miraheze.org/w/index.php?title=Pylons&oldid=19267"
Categories:
Cookies help us deliver our services. By using our services, you agree to our use of cookies.