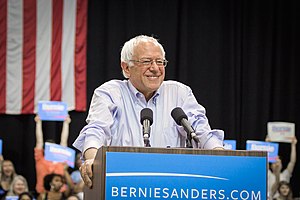 Now come over here and sit on my apple

“Teatsucking is the basis of Bernie Sanders' campaign”

“Barack Obama was supposed to give you this crap... now you think some prostate infected old man is going to do this?”

Bernie 'Prostate Infected' Sanders was a potential Democratic Nominee in both 2016 and 2020 American Presidential Elections and is the current Senator of Vermont. Ghost despises his 'leftist, communist' agenda and refers to his supporters as 'a bunch of whiny, entitled losers who just want handouts.' Ghost has remarked that his voice sounds like that of the principal from the popular 90s TV show Beavis and Butthead (and his impression of the man is mostly a redux of that character). Ghost questions his appeal with young voters, stating '[he doesn't] understand why young people are mesmerized by this guy...'

As much as Ghost dislikes the man, he has told his supporters to 'keep out of the Trump Train's ass and make sure your own guy gets elected' as he believes the Democratic Party is cheating Bernie Sanders out of the nomination.

Ghost claims that it's very possible Bernie Sanders is only remaining in the campaign to collect more campaign money because politicians are allowed to pocket the money they don't spend. He claims that he's, essentially, taking in-debt college student's last savings from them by tricking them into thinking they're going to somehow get free college.

More recently, in June 2016, Ghost claimed he was 'drinking feel the Bern in the crotch assholes' tears' as Bernie Sanders' chances of winning diminished to virtually nothing. He continued reiterating, as he had for a long time while covering him before, the assertion that Bernie was only in the race for the campaign funds which candidates are allowed to pocket after their race finishes, non-tax-deductible.

After dropping out, Ghost continued to mock Bernie and his supporters even more, especially with how he endorsed Hillary Clinton and is out campaigning for her, contradicting earlier statements that he said she was unfit for the presidency.

Ghost has treated Sanders' plans to run for the 2020 presidential elections with ridicule, as he has a hard time believing that someone aged 78 would be capable of handling presidential duties, due to the stressful nature of the job.

Both during and after Sanders' presidential primary campaign, Ghost has often done an imitation of Sanders' voice. Initially, he used this mostly to make serious attacks on the man's principles and actions. However, as his campaign died down and the theory that Sanders was exploiting his followers for money came to the forefront of Ghost's criticism, the impersonation evolved to mostly consist of telling his supporters to "Come on over here, that's it, take your underwears off", perhaps as an alternate interpretation of "taking advantage of young people".

This segment has mostly been called "Uncle Bernie" by fans thanks to the way Ghost goes about them, and Ghost eventually began using this name himself. The disturbing nature of Uncle Bernie's monologues has made them ripe splice fodder, and trolls have angered Ghost on several occasions by making splices of Bernie having sexual encounters with him.

Retrieved from "https://truecapitalist.miraheze.org/w/index.php?title=Bernie_Sanders&oldid=18763"
Categories:
Cookies help us deliver our services. By using our services, you agree to our use of cookies.