“You see what you started Engineer!?”

—Ghost, after the song is played on the show yet again. 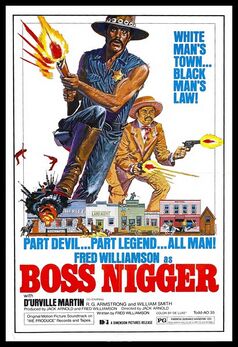 Boss Nigger (also known as Boss and The Black Bounty Killer) is a 1975 Blaxploitation Western directed by Jack Arnold starring former football player Fred Williamson who also served as the writer and producer. Story of the film focuses on the titular bounty hunter Boss and his sidekick Amos who arrive on an entirely white town in the west in order to hunt for a man that has been terrorizing it. Two of them take over the vacant office of sheriff and deputy and find out that the town is applying Jim Crow-era segregation laws which they aim to reverse on the racist community. The film is often seen as a spiritual successor to Williamson's earlier two movies The Legend of Nigger Charley and The Soul of Nigger Charley and many people even believe that Boss is in fact Nigger Charley. The film is probably best remembered for its catchy theme tune and it's generally regarded as one of Williamson's best films.

During 2012, Ghost announced his support for Republican presidential candidate Herman Cain, he asked Engineer to whip out a badass song to celebrate this endorsement. Engineer played Boss Nigger's theme music which Ghost thought was catchy until the title of the film was dropped at which point Ghost reacted with utter disgust and started to blame engineer for both being a racist and for embarrassing him in front of the listeners. Trolls immediately after this incident made sure that Ghost would never live down this moment by both playing the song and splicing it during Radio Graffiti. Because of the impact this incident had on the broadcast, the song became synonymous with Engineer and his occasionally rebellious attitude on the show and he often played it during his takeovers.

One time, a caller played an audio clip of Fred Williamson announcing his support for Donald Trump during Radio Graffiti (the video above) which Ghost saw as yet another proof that Trump isn't a racist.

The song became popular once again during TCR Civil War when it was spammed and remixed by trolls to show their support for Engineer.

Ghost stated since his return that his show had a major impact on the movie's popularity and helped introduce it to an entirely new audience. He has gone as far as demand the movie's distributors pay him for the supposed increased sales of the film. Boss Nigger's TV Tropes page credits True Capitalist Radio as the most likely reason that the movie has its own page on the wiki.

Retrieved from "https://truecapitalist.miraheze.org/w/index.php?title=Boss_Nigger&oldid=14151"
Categories:
Cookies help us deliver our services. By using our services, you agree to our use of cookies.