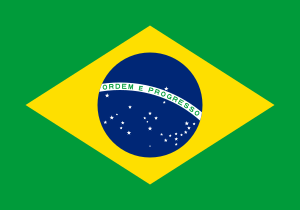 Brazil, officially called the Federative Republic of Brazil, is a country located in South America. It is bordered by several countries, one of which is Venezuela. Its capital is located in Brasília and its largest city is São Paulo. Its current president is Jair Bolsonaro. Throughout The Return of True Capitalist Radio, it has been discussed due to its government issues the country was facing at the time. In 2016, its socialist President, Dilma Rousseff, was removed from office, in which she was facing the largest corruption in Brazilian government history.

Ghost has posted on Gab in Portuguese, praising capitalism and wanting the country to "kill communists before they destroy Brazil."

Social Liberal Party candidate Jair Bolsonaro, who competed against Workers Party candidate Fernando Haddad, who previously served in Rousseff's cabinet. Part of Bolsonaro's foreign policy objective is to improve relations between Israel and the United States of America. Bolsonaro won the first round of the elections, and won the run-off election on October 28, 2018, becoming its President.

Retrieved from "https://truecapitalist.miraheze.org/w/index.php?title=Brazil&oldid=13194"
Categories:
Cookies help us deliver our services. By using our services, you agree to our use of cookies.