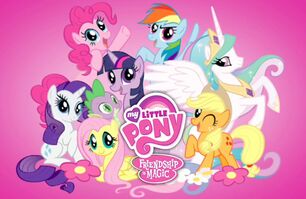 “I'm SICK of bronies, are you kidding me? I'm sick of these stupid, over-feminine, in the closet, takin' it up the pooper, prostate massaging, hotdog up the ass-havin', nipple clamp-lovin', butt plug up the ass-lookin', wish they had a pony shoved up their clogged-up pooper-havin' pieces of crap! I DON'T LIKE THEM!”

The term brony is used predominately to refer to male fans outside of the target demographic of My Little Pony Friendship is Magic, though it may include older female fans too. The term pegasisters is very rarely used for female fans.

The term originated on 4chan's comics and cartoons discussion board /co/ in October 2010 shortly after the board's community began discussing the show. It was eventually moved to /mlp/. The Pony board has strong connections to Ghost, and many of today's posters were True Capitalist Radio trolls during the show's run. As a group, the bronies formed at least a significant portion, if not a majority, of Ghost's listeners from mid-2011 onward. However by Ghost's return in 2016 the size of the fandom has dwindled significantly and brony callers are becoming relatively rare as anime fans have mostly taken up the mantle as Ghost's primary enemy fandom.

The Bronies originally began listening to the True Capitalist Radio towards the end of May 2011 through the beginning of June 2011. They were brought there by Ghost's reputation for anti-brony sentiments.

Ghost had an intense hatred for bronies, calling them "over-feminized fruits". This, of course, leads to splices and usernames referencing the show. Some trolls even use audio from the show to troll him. Since they make up a large portion of his fan base, he tends to go easy on them now. Some callers have even tried to reason with him, and this one has been the most successful, although Ghost still thinks all bronies are sick.

Ghost has shown a great deal of knowledge about details of the show and its fandom, most famously making references to the quality of season 2 after the first episode of the show, stating "We're supposed to believe this crap?" - when played back to him, he swears it is a splice. Referring to or implying Ghost being a brony is a common method of trolling, though it has lost much of its efficacy through overuse.

Ghost has also made nods such as referencing Winter Wrap-Up in a tweet, using the term clopping, recognizing and using the term "cutie mark", hearing about the Lyra sex plushie and discussing it, and even going as far as getting a reference to the notoriously graphic fanfiction Cupcakes in Episode 200. He admitted he wanted to make My Little Pony plushies in Episode 220, but for the money they brought in rather than the creativity factor. Thus, some believe that he is actually a closet brony himself.

Because of how much bronies seem to offend Ghost, many callers have claimed to belong to the fandom at different points in time. Most are dismissed as fruits, but some, such as Asho, have caused Ghost to rage strongly by claiming this. Callers who claim to belong to both the fandom and an ethnic minority are particularly irritating to Ghost, such as the aforementioned Asho (referred to as a "bean-and-cheese brony") and EquestrianCitizen (a "black brony"). Serious callers have also angered Ghost by announcing their membership in the brony fandom. For instance Ghost became particularly angry at examples include Tzeki, Suspicious Tumbleweed and the Teutonic Plague when they announced their membership. On a similar note, many members of the Capitalist Army voice their displeasure for the fandom on Twitter or in the Paltalk whenever a new user attempts to discuss ponies, or bronies in general.

Do you still troll Ghost with brony material in 2018? Wonder why you don't get a reaction like he did in 2011 or 2012? We here have the perfect article for you.

Since The Return, most trolls don't tolerate bronies anymore and mentioning anything positive about the fandom is an almost guaranteed way to get banned in the OG Capitalist Army chatroom. Because of this, most bronies instead follow Ghost's broadcasts through TheBronyNetwork streams.

Though 2016 has been a quiet year for bronies in True Capitalist Radio, there did happen a few notable events. One such thing was brony news site Equestria Daily's founder and moderator Sethisto announcing to Ghost over twitter that he had written an article about Ghost and his show in Equestria Daily, much to Ghost's disgust. Another event they were mentioned was when Tub Guy telling to ghost a story he had promised to tell since he had returned about a potential future serial killer brony with whom he was roommates with in college.

May 2016 saw repeated calls by a brony named MaskedPony, who with his speech impediment managed to gain sympathy from Ghost and hatred from trolls. His repeated calls eventually pissed trolls off to the point that there were talks of getting him off the show for good. This finally happened on June 6th, when trolls discovered My Little Pony fanfiction written by him with Twilight Sparkle and Rainbow Dash wearing diapers. Ghost quickly became aware of this and talked with him about the situation in the third hour of episode 282. MaskedPony tried to explain to Ghost that he wrote these stories because he had bowel problems in the past, but Ghost had already made his mind about the matter and threw him off the air in absolute disgust, kicking off the 2016 MaskedPony Incident. Aftermath of MaskedPony Incident saw increasing numbers of bronies returning to the show.

During Episode 350, when Ghost was calling people from the "Guccifer 2.0 leaks", until he caught wind of a scheme where the people in TheBronyNetwork chatroom were planning to trick Ghost into calling FBI during the show. This caused Ghost to end the show early without any Radio Graffiti. Many trolls were pissed off by this outcome and along with Ghost blamed the bronies for ruining the show, leading into some of the highest anti-brony tension in TCR history. After the episode TheBronyNetwork was not pleased with the outcome and asked his listeners to check on who was behind the incident. Eventually the incident was blamed on someone named "Kylecnj" and TheBronyNetwork informed Ghost about this.

In Episode 365, several Brony fans of TCR (Twilie Atkins, MaskedPony, Disco Waffle, LiquidSchwartz and Scarlet Moon) turned the betrayal call on it's head endorsing Team Ghost, ending with Hillary Clinton and the Engineer endorsing Team Ghost, which led to much of the same rage as the original call with Ghost stating that the bronies were "trying to call up my buttcrack".

During Capitalist Episode 468, Ghost went off-keister and claimed Evan McMullin and the CIA has psyopped the bronies.

Following the events of the Saturday Night Troll show Episode 10, Ghost claimed on his social media site Ghost.Report that he would be suspending his regular broadcast because he didn't want to continue to serve the "manchildren" such as bronies who were patronizing his broadcasts.

After receiving much backlash from the community, Ghost posted an article on ghost.report, claiming to extend an "Olive Branch" to the brony community, claiming Ghost would not generalize the entire brony fandom and acknowledge the fact that not only do bronies make up a good portion of his fanbase but to also accept that only a small percentage of bronies are what he would consider pedophiles.

Many were stunned by this, while few called his bluff, believing this was just a ruse. Then, Ghost tweeted a week later a report of a person who went on a shooting, asking in the tweet if "bronies are murdering now?!" despite the report claiming the person had a history of mental problems. This set relations back down to an all new low as this contradicted his olive branch post, while disappointing several people in the fandom.

After Ghost returned from his break on Halloween 2017, he called out the community a handful of times in his rants on autism, Asperger's and manchildren. Brony trolls were for the most part nonexistent, except for in early 2018 where Alex Jones was "taking his bronies" from Ghost's show to his, leading Ghost to rage.

At various points in time, each of the main characters from the cartoon has called into the broadcast, some more than once.

Ghost likes to dress up sometimes