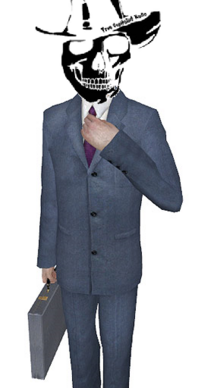 “They're the ones ruining the country!”

—Ghost, on his bureaucratic brethren.

Bureaucratic Ghost is one of Ghost's many Fan Given Alter Egos, such as Jewish Ghost, Communist Ghost and John Conquest. Ghost has a much-expressed loathing of bureaucrats and the bureaucratic system, viewing them as power-hungry sociopaths out to control all aspects of American life. During Episode 242, Ghost read the Twitter Name "True Bureaucrat Radio", which caused him much rage. The immediate following show was flooded with Bureaucratic trolls and jokes, such as has happened in the past when allegations of Ghost being Jewish or etc. have occurred. Bureaucrat jokes quickly fell out of favor however, being mostly abandoned as a trolling tactic by June 2016.

Retrieved from "https://truecapitalist.miraheze.org/w/index.php?title=Bureaucratic_Ghost&oldid=11867"
Categories:
Cookies help us deliver our services. By using our services, you agree to our use of cookies.