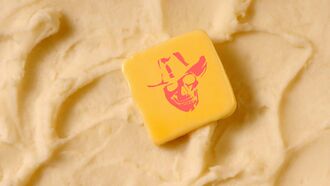 Ghost on True Capitalist Radio has claimed that butter, commonly believed to be linked to obesity and other health problems, is actually healthy ("a stick of butter a day keeps the doctor away"). He has cited many anecdotal pieces of evidence regarding people he claims to have known who have lived for longer-than-average periods of time while also consuming large amounts of butter.

Many trolls have used this as evidence that Ghost is a hambone, that he has cancer and blamed various fictitious or otherwise health-problems Ghost has been ridden with on his butter consumption. Ghost has found these trolls surprisingly upsetting and rages regularly at them. In the wake of Ghost cancelling the June 30th show for severe chest pains requiring hospitalization, butter has quickly become a regular reference on True Capitalist Radio as the alleged cause of his malady.

Ghost has claimed that, besides butter, large amounts of salt is healthy for human consumption and expands life span. He claims that the Japanese live the longest, on average, of any society on earth and that this must somehow be tied to the fact that they also consume the highest percentage of salt in their regular on-average diet. This has also led to trolling though not to the same degree as butter.

Retrieved from "https://truecapitalist.miraheze.org/w/index.php?title=Butter&oldid=5658"
Categories:
Cookies help us deliver our services. By using our services, you agree to our use of cookies.