Description: It's Baller Friday! Ghost opens up the phone lines to discuss anything you want to talk about on this free-format edition of True Capitalist Radio. Ghost also add a third LIVE hour to the show by popular demand! The Engineer puts his autograph for sale, while Ghost is certain that sales will be disappointing. Whatever you would like to discuss! Donald Trump? Hillary Clinton? Obama? Bernie Sanders? LGBTQ? Race Relations? Charlotte riots? Police Brutality? The Police State? Syria? Iraq? ISIS? Russia? Turkey? China? WW3? Economics? Politics? Stocks? Money? Relationships? Advice? Anything you would like to discuss! Your calls, Twitter shoutouts and Radio Graffiti on this edition. 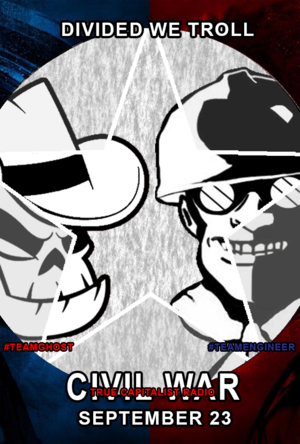 TCR Civil War poster depicting #TeamGhost Vs. Team Engineer by Twilie Atkins which was retweeted by Ghost during the show.

Ghost officially started to sell Engineer autographs due to popular demand. This resulted in people on Twitter making "Team Engineer" tweets to Ghost, upsetting him. Trolls later tweeted Ghost rage-inducing pictures such as his own autograph being burned, being read by Adolf Hitler, and being ejaculated on. Engineer's autograph had also been edited, with images of it on Trump Tower, being used as a guitar pick, and being held by Alex Jones and Trump. Ghost raged insanely hard at the images, causing his voice to go out. Ghost was very close to rage quitting, but kept going.

During Radio Graffiti, there were a few calls related to the autograph sales, including more posts on Twitter. Brony Drumming played a Fall Out Boy remix. Disco Waffle and Twilie Atkins came together to play "True My Little Pony Radio", causing Ghost to get pissed off. There was an insta-splice, making Ghost irate. Ghost was enraged again upon seeing that Engineer sold two more autographs, and Twitter posts of his autograph with Colin Kaepernick and Keemstar. There was a splice of Tub Guy at a McDonald's drive-thru. Finally, someone played a splice of the Engineer from TF2 shooting Ghost.

This episode dethroned Episode 329 with a record-breaking 36 cans.wav and held the #1 record for most cans.wav in a single show until The Ghost Show Episode 5 broke the record by 1 cans.wav on January 9th, 2019.

This show was the first one since Episode 226 in 2012 to go for a full 3 hours, since Ghost extended the show. As expected by the results of the poll, the new schedule for the show is 4PM-7PM CST.

This episode was noted on Ghost's Twitter as being "the worst show of [his] life!"

Album of images retweeted by Ghost (and others): https://imgur.com/a/iq2Sj

Retrieved from "https://truecapitalist.miraheze.org/w/index.php?title=Capitalist_Episode_358&oldid=16446"
Categories:
Cookies help us deliver our services. By using our services, you agree to our use of cookies.