Description: Markets continue to rise on... I don't know? Donald Trump is Time magazine's "Person of the Year!" Trump continues to construct his admin & gets $50 Billion investment commitment from Japan's Softbank (tired of winning yet?). As journalist struggle to define "Fake News," the Pope warns over the "sin of spreading disinformation." Ghost continues to call for an "Independent Media Assembly!" Ghost opens up the phone-lines and takes Twitter questions on this episiode. Ghost is forced to sell "Pony Merch!" Your calls, Twitter shoutouts and Radio Graffiti. 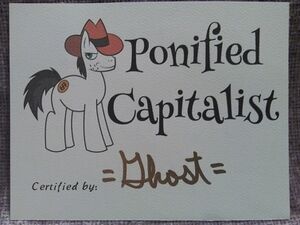 During the broadcast, Ghost announced that he will be selling brony merchandise despite a ton of opposition. Later on, during Radio Graffiti, people began to tweet at Ghost for other merchandise like SpongeBob and Touhou, making him heavily regret selling pony merch.

During Twitter Shoutouts, there were Pearl Harbor-related names, along with the name "BJsForCometPizzaCoins", causing massive rage.

Retrieved from "https://truecapitalist.miraheze.org/w/index.php?title=Capitalist_Episode_407&oldid=14688"
Category:
Cookies help us deliver our services. By using our services, you agree to our use of cookies.