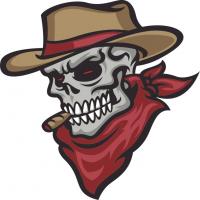 Description: HAPPY HALLOWEEN! Ghost is back after laying low for the Summer. Ghost discusses what has happened since he's been gone and the future scheduling of TCR. Ghost goes into cryptocurrency and stock market news in the first hour. President Trump and other U.S. political news in the second hour and international news in the third hour (the format HAS NOT CHANGED). And don't forget Gab shoutouts (Death to Twitter) and Radio Graffiti. Ghost is back and better than ever! Follow on Gab.ai: @PoliticsGhost

This episode marks Ghost's return from his near six-month break. Before he broadcasted the episode, Ghost had changed his avatar again on both Gab and BTR.

Ghost explained that he was on hiatus due to Robert Mueller's investigations, and fears of being put on an indictment list. Before Shoutouts, Ghost saw information about a HIV-positive restaurant. Although he thought it was fake at first, he cans.wav'd when he found out it was real, and raged more when he saw more news involving HIV cases in San Antonio, and a troll making reservations for him at the "Poz-Hole" restaurant.

During Shoutouts, there were many names related to the Vegas shooting from early October, and the Manhattan Terrorist Attack that happened on the same day as this episode, with the first name being "Mandalay Bay Bullet Buffet".

During Radio Graffiti, Twilie was the only anonymous caller, with her celebrating her birthday. Mr.Tamsy played an old splice by 8Equal involving Tamina, offending Ghost to the point of stating that 8Equal should seek help. Tub Guy also proceeded to troll Ghost by referencing the "poz-hole" restaurant. There were 21 cans in this episode.

Retrieved from "https://truecapitalist.miraheze.org/w/index.php?title=Capitalist_Episode_501&oldid=13956"
Categories:
Cookies help us deliver our services. By using our services, you agree to our use of cookies.