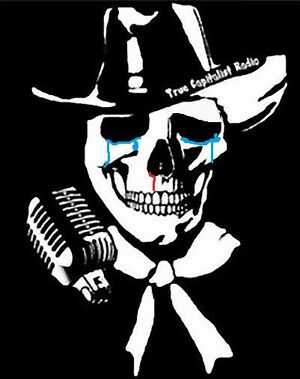 True Capitalist Radio, and more recently, The Ghost Show had a long list of trolls that called into its broadcast all the way back from 2010. Some were great, and others were not so good. This page details those trolls who made a smaller contribution than that of the more famous trolls, whether it be during Radio Graffiti or from their own video uploads that Ghost became annoyed with them.

Please create a brand new page for anyone on this list whose description goes beyond two paragraphs.

Note that many trolls use numerous FreeConferenceCall (previously Skype) names, and sometimes call with two or even three per show to play multiple sound files. Thus, one supposed 'audio troll' may actually be the exact same person as another one.

Below is a list of active callers. If you are looking for a list of former callers, see Former Minor Trolls

American Game Master is a troll that has refused to use the TTS system, having promised to not give ghost a single cent, his first two calls involved Ghost and Tony in Tell Me Lies splices, before dropping them in favor of flavors of the week. He has done the following:

After a several-month hiatus, he has returned to playing splices on Radio Graffiti

Ardhamon is a return-era troll who became active during The Ghost Show-era. He is known to troll ghost via Text-to-Speech & video donations, and is also one of the voices behind Germit The Gay Frog. Occasionally, he will also call in on Radio Graffiti.

CoolVibrations is a TGS-era splicer and remixer known for use of eurobeat songs on his splices.

Explode (aka Explode Audio Productions) is a TGS-era splicer and remixer who recently became notable for his wide variety of splices.

HatKid is a TGS-era splicer who has become known for his wide variety of splices.

MKUltra is a TGS-era splicer and remixer known for his N-word remixes towards the end of his splices, as well as causing Ghost to cans.wav every time.

As of now, MKULTRA seems to have gone on hiatus

Petisss is a TGS-era troll who is notorious for his splices on Radio Graffiti, often guaranteeing Ghost to massively rage. While he rarely donates, he is also known for his artwork on the forums. He first began trolling in August 2019.

Zed_Commander, the Ghost Show-era troll, is mostly known for calling in other people's remixes and splices using area codes 352 and 614, similar to Scarlet Moon's former queue, such as ThisIsSparta and Serious Samsung. In addition, he has made several of his own splices and remixes and has worked directly with thisissparta789789 on a few splices and remixes. When he did the voice of Germit the Gay Frog, he assisted J-Man with script-writing and editing. Zed is one of the first trolls to use free conference calls to play splices enabling Ghost to call on people by their names. This was a positive response to Zed debuting a character of himself as a news anchor in episode 60 of The Ghost Show. Zed has mostly retired his name from Radio Graffiti due to late Ghost's broadcasts and poor quality, but he continues to splice anonymously.

Retrieved from "https://truecapitalist.miraheze.org/w/index.php?title=Minor_Trolls&oldid=21185#Capitalist_Queer"
Categories:
Cookies help us deliver our services. By using our services, you agree to our use of cookies.