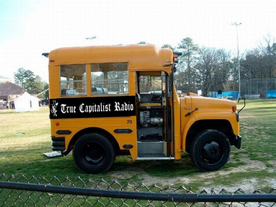 These are the people who are dubbed the "Short Bus" by trolls and listeners alike. These are ones who attempt to counter trolls, kick Ghost off-keister, brown-nose and sound like half-a-tards.

The Short Bus became a popular topic for trolling shortly after Ghost conceived it. One of the most notable examples was when after Episode 445, Pylons, TopBadge, and 8Equal made a parody of The Magic School Bus theme song for the Short Bus. During Episode 446, Tub Guy gave Ghost the link to it during Radio Graffiti, which led to him getting pissed off. The Short Bus was also brought up quite frequently in splices.

After the Break, the concept of the Short Bus seems to have been discontinued, as neither or the trolls have mentioned it since.

This category has only the following subcategory.

The following 8 pages are in this category, out of 8 total.

Retrieved from "https://truecapitalist.miraheze.org/w/index.php?title=Category:Short_Bus_Member&oldid=17263"
Categories:
Cookies help us deliver our services. By using our services, you agree to our use of cookies.