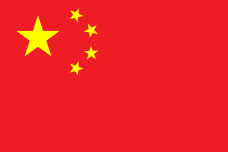 China, or the People's Republic of China in full, is a nation located in East Asia that is known for its rich culture, large land claims and for having the world's largest population. Ghost, the host of the True Capitalist Radio broadcast, often covers stories and news about and coming from China.

Ghost, being a capitalist, has always been highly critical of the political and social policies of China. Ghost criticizes their single-party rule, their communism, and their authoritarianism. Ghost often reports on and supports groups that are standing against the communist government of China, such as the Tibetan Monks. He agrees with Donald Trump that the United States needs to be more tough on China.

Whenever Ghost covers an article about China, he claims "Because Blog Talk Radio is, in fact, broadcasted in China, I have to allow for the Chinese government to give a rebuttal to everything that I say." He uses this as a chance to mock the Chinese-English accent, culture, nation and race by pretending to be an angry Chinese man who hates America. Mr. Fortune Cookie claims that Americans should continue paying their taxes because "we own you American mothafuckas" and that he does everything he does for Chairman Mao.

The 2019 Hong Kong protests, is an ongoing series of demonstrations in Hong Kong triggered by the introduction of the Fugitive Offenders amendment bill by the Hong Kong government. This led to concerns that the bill would subject Hong Kong residents and visitors to the jursidiction and legal system of mainland China, which would undermine the region's autonomy and Hong Kong people's civil liberties.

Ghost naturally has voiced his full support of the Hong Kong protests to the point of passionate rage. He has also voiced his criticism over American millennials supporting and wanting Socialism, meanwhile the millennials in Hong Kong fight for the opposite by using America and it’s flag as symbols of freedom, even if it costs them their lives.

Throughout the Show's History

Retrieved from "https://truecapitalist.miraheze.org/w/index.php?title=China&oldid=17664"
Categories:
Cookies help us deliver our services. By using our services, you agree to our use of cookies.