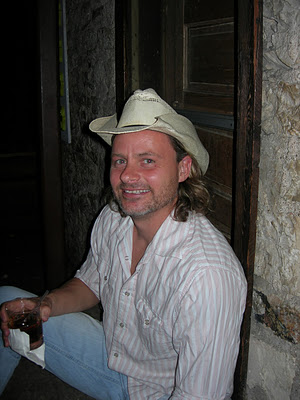 Chris Marsh at the Mean Eyed Cat in Austin.

Chris Marsh is a fan given alter-ego for Ghost, the host of True Capitalist Radio. Marsh is the owner of the Mean Eyed Cat Bar. Ghost is known to frequent bars in Austin, namely the Mean Eyed Cat and a possible connection was made that Ghost may actually be bar owner Chris Marsh. The bar is dedicated to Johnny Cash (who played there) and even named after one of his songs. Chris seems to be a big music fan which is consistent with Ghost wide, eclectic musical taste.

However this alter ego is potentially less likely based on Marsh's age and his possible political stance (he follows Rachel Maddow on Twitter). Ghost denies all claims of being Chris Marsh, and has stated that Marsh was spammed with an endless number of calls once his name made mention on the broadcast, and had 'messaged him asking it to stop'. Trolls diverted their attention to John Conquest shortly afterwards.

Callers who mention the Mean Eyed Cat get a swift mute from Ghost, who then grumbles about individuals calling bars looking for him.

Retrieved from "https://truecapitalist.miraheze.org/w/index.php?title=Chris_Marsh&oldid=7860"
Category:
Cookies help us deliver our services. By using our services, you agree to our use of cookies.