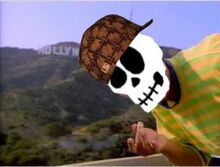 CosmoBrockington was an avid Remixer on the True Capitalist Radio broadcast hosted by Ghost. He created about ten remixes starting in October 2011, many of which were played during Radio Graffiti and got Ghost very upset, since the songs had been sung recently.

He also tweeted at Ghost frequently, and Ghost gave him a bit of positive attention despite his more slanderous remixes. Ghost has actually praised many of them, laughing at how the lyrics are versed well. He was often referred to as 'CosBro' rather than his full name.

Cosmo became inactive after the death of Skype in 2016.

Retrieved from "https://truecapitalist.miraheze.org/w/index.php?title=CosmoBrockington&oldid=13907"
Categories:
Cookies help us deliver our services. By using our services, you agree to our use of cookies.