“We got a whole bunch' of these disgusting cyber vermin, who continue to besmirch me after I've told them that they'll be getting Punitive Damages out of their asses for this!”

—Ghost, on his fanbase. 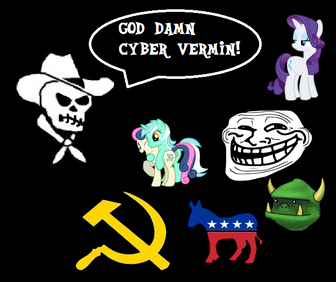 Cyber Vermin is a term coined by Ghost, the host the True Capitalist Radio broadcast, to refer collectively to bronies, trolls, buttstalkers, and other "vermin" of the internet who spend much of their time harassing his show. He began regularly using the phrase on his return to the broadcast in Episode 128 after a week-long break.

It is one of his well known catchphrases, and is typically used along with Troll Terrorist during his rants.

While Ghost usually only uses this term while angry at his trolls/fans, he also used it to affectionally refer to his callers - which he did during the Ghosties.

Retrieved from "https://truecapitalist.miraheze.org/w/index.php?title=Cyber_Vermin&oldid=11949"
Categories:
Cookies help us deliver our services. By using our services, you agree to our use of cookies.