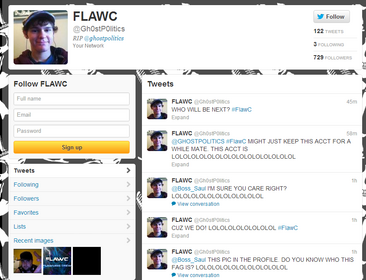 The December 2012 Twitter hacking and doxing incident was a month-long conflict in Ghost's history spanning from December 8th 2012, to January 29th 2013. It showed a short increase in activity from the person who hacked into his account, and ultimately resulted in the impostor losing Ghost's Twitter account. 'ghostpolitics'. 'gh0stp0litics' was also taken over by an individual calling himself the 'Flawless Crew', resulting in a mass number of tweets in all caps. Many of Ghost's remaining followers unfollowed the hacked account following this incident and refused to ever associate with him again due to the behavior the troll exhibited (which was the impostor).

After the actual Ghost got hacked, he never returned until 2015. However, a person claimed his account and made daily tweets on news events and subtle hints at starting his show again (most notably in November, when he posted a clip from The Terminator of Schwarzenegger saying the famous line "I'll be back".) A few Twitter trolls began to insult him in late November about his ideas of trying a show again. "Ghost" reciprocated by insulting the 'GNAA', a well known troll organization on the internet from which a few of it's members harassed "Ghost" from time to time. "Ghost" tweeted that the trolls who attempted to dox him were the primary reason he quit his show. Immediately there was a surge of attention onto him when a group began to spam him and send him messages to provoke him. "Ghost" took great annoyance in this, and eventually called them out in a DM which a member took a snapshot of (now lost in the Twitter archives), and trolls began to mass report his account in a fray as "Ghost" eventually came to know him, one of the self proclaimed GNAA members and a great annoyance to Ghost in the past.

"Ghost" was suspended on December 8th for 'hate speech and promoting violence', and was left without an official backup account for two days. In response, a number of Twitter users set up fake Ghost accounts such as (@ghostpoliticss) and (@GhostPolit_Tics), all claiming to be Ghost. Throughout the initial confusion, the trolls responsible for "Ghost's" suspension gleefully expressed their success while Ghost's listeners attempted to make sense of the blow dealt to the former BlogTalkRadio host.

On December 10th, 2012,'gh0stp0litics', an old handle Ghost used for a few days after losing his account for a week during the earlier event that led to the closure of his show, came out of inactivity with an stylized image saying 'FLAWLESS CREW'. PranksterPinkiePie was the first to comment right away saying that Ghost had evidently lost his old alternate account to a troll now.

Much information on who the 'Flawless Crew' is remains speculative, as little information on them seems to exist as of 2013. They were a trolling group who agitated Vince in the Bay and his show 'Disorderly Conduct' on BlogTalkRadio in 2011. Ghost was known to listen to these broadcasts himself and was friendly with Vince, so it is likely he remembered/had knowledge of their existence or knew the members at some point.

Gh0stp0litics, hence known as 'FLAWC', immediately declared 'victory' and started spamming a link to a 'Flawless Crew wikia' (which has since been vandalized and portions of which deleted), proving their existence to VITB, who had his own page on the wikia. Numerous references to Ghost's past, such as VITB, and TrollsNews were made all in one day, along with threats on 'who would be next [for doxxing/hacking].'

The next day, FLAWC released some information on 'WelfareFTW', another of Shonic's old Twitter accounts. He also announced the uncovering of some earlier history of Ghost: his involvement in a 'hack war' on Yahoo Chat from 1999, and of a few of his aliases, notably 'Ghost', 'Asshole 5000', and 'The Bad One'.

In the days that followed, FLAWC jabbed at the arrest of the GNAA's leader weev, and threatened that action would be taken against them, along with a series of philosophical tweets akin in a very similar fashion to Ghost, questioning the actions of people (more specifically, those with Asperger's) and their moral values of good or evil. All of the tweets pertaining to opinions similar to Ghost can be found at this summary of the tweets, only abridged for links and small edits for reading comprehension. In total, there were 46 tweets sent out, spaced by the 140 character limits.

On December 11, 2012, Ghost uploaded a video on his official YouTube account of the doxing incident of CelticBrony. The video received massive dislikes within only 2 days, and Ghost took it down after commenters warned him of his seemingly extremist actions. The video itself was apparently a call to Celtic's mother, asking if he had killed himself, and Ghost strongly supported this idea in the description.

On January 3rd, 2013, another 'alternate' account, GHOSTPOLlTICS (Spelling the first i with an L instead) acknowledged that he was the real Ghost. He stated that shows would not begin again, citing potential health concerns. While there was no verification of this account being 'official' in any way, his tweets to KaraszKun, and reactions to the Piers Morgan interview with Alex Jones greatly indicated this being the real Ghost.

On January 29th, 2013, the person pretending to be Ghost recovered his Gh0stp0litics account from the hacker and said that his original account was permanently suspended. He later encouraged people to follow his YouTube account and said he will distance himself from his "fandom", while remaining for the "intellectual and revolutionary capitalists". He entered a sixth month long period of inactivity following this, only tweeting less then three times per week unlike his usual fifteen or so.

As of A Message By Ghost in 2015, it was indeed confirmed none of this was Ghost, and any activity was indeed an impostor.

Retrieved from "https://truecapitalist.miraheze.org/w/index.php?title=December_2012_Twitter_hacking_and_doxing&oldid=11649"
Category:
Cookies help us deliver our services. By using our services, you agree to our use of cookies.