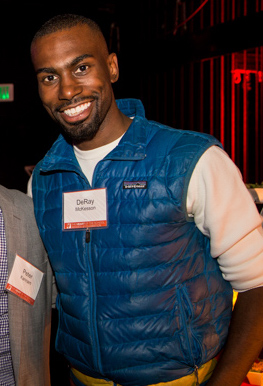 DeRay Mckesson is an American civil rights activist, educator, and politician. He is a member of the Black Lives Matter movement and is is mainly known for his activity in social media sites as well as his participation in several protests. As with rest of the BLM members, Ghost has been critical of Deray and has frequently attacked him both on Twitter and during True Capitalist Radio broadcasts.

During June of 2016 Ghost launched a Twitter-campaign against Deray after, as a result of a hacking, it was revealed had engaged in a conversation with members of the United States Department of Justice in which he suggested and supported the implementation of martial law in the 2016 Presidential Election to delay the election, presumably to increase the chances of a liberal victory at a later date. Ghost had his followers repeatedly Tweet Deray, questioning him why he wanted to declare martial law.

In July 7, 2016 five police officers were killed in Dallas during a Black Lives Matter protest. Ghost blamed Deray as being partly responsible for the event and as a form of vengeance Ghost released Deray's dox on his Twitter account.

In July 10, 2016 Deray was arrested for a short time and he made comparisons between the Black Lives Matter protests and his fight for LGBT rights as a gay man. Ghost quickly used the BLM members reluctance to follow a gay man to his advantage and begun another campaign, this time focusing on Deray's homosexuality. In this campaign Ghost focused on exposing Deray's homosexuality as much as possible because he saw Deray's comparison between BLM and LGBT community and the subsequently decreasing support from BLM members as a proof that BLM doesn't really care about black rights.

With Ghost's more and more frequent coverage of Deray on the show has lead to an increasing number of trolls using him as a method of annoying Ghost. Initially this started with a few Twitter names such as TransDeray (which Ghost actually thought was pretty funny) but after frequent discussions about Deray's homosexuality, these evolved into a series of sick, sadistic splices depicting Ghost having sex with Deray. These splices turned out to be very successful and made Ghost Cans.wav several times during the show.

Retrieved from "https://truecapitalist.miraheze.org/w/index.php?title=Deray&oldid=14198"
Categories:
Cookies help us deliver our services. By using our services, you agree to our use of cookies.