Disco Waffle was a Splice / Remix maker that became popular in 2016 for a few of his splices, the first of which were played in the beginning of August in 2016. He was also frequently a part of Twitter Shoutouts under the same name, and credited with creating #MakeTeutonicAMeme. Disco Waffle was a well known brony in Ghost's Inner Circle, before being voted out by the group. 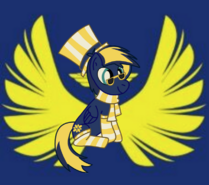 During the Body Pillow raid of Ghost, where people were photoshopping images onto body pillows to troll Ghost, Disco Waffle jumped in the action, making ones of the Teutonic Plague and MaskedPony, causing Ghost to cans.wav multiple times and even had it seem like Ghost was crying. But the most infamous of the ones made was on the day after; a body pillow of one of Leslie Jones's nudes. This caused Ghost to go on a ten minute soliloquy about whether or not Leslie Jones was a woman or had "a one inch pudd".

Late 2016 era of True Capitalist Radio saw increasing tensions between brony and non-brony fans of True Capitalist Radio after incidents such as the 2016 MaskedPony Incident, the FBI Call Incident, Ghost's decision to sell pony autographs as well as an increasing amount of brony callers which most non-bronies found annoying gave TCR fans an increasingly negative view of the community. This shift in attitudes became evident in December 2016, after Elfoxoloco refused to allow bronies in the comment section of his videos anymore, he received a dislike-bomb and hate comments and eventually a dox attempt. This led him to hold a poll on Twitter if he should outright cut Brony calls from his uploads, which ended in a tie. He stated he decided to remove them anyway due to the tie, causing some backlash from some bronies.

The drama continued when he blamed Disco Waffle for plagiarizing a splice by YouTube user UgandanPizzaPolice. Disco Waffle proceeded to defend himself from these allegations by pointing out that he didn't take the content directly from UgandanPizzaPolice and that his content fell under fair use since he had added Ghost's voice to his splice. Disco ultimately deleted the video containing the splice after UgandanPizzaPolice preceded to threaten him with a DMCA strikedown. The incident caused Elfoxo's already strained relationship with the brony community to deteriorate even further and most members of TCR brony community and TheBronyNetwork currently remain blocked from commenting on his videos on YouTube.

Elfoxo later admitted that he and UgandanPizzaPolice had orchestrated the whole incident just to mess with Disco Waffle and that the whole DMCA strikedown threat had been a bluff.

It was later revealed that Disco Waffle potentially had the same diaper fetish as MaskedPony when Elfoxo tweeted out a link to a Derpibooru page that contained Pampers & Ponies themed art of Disco Waffle, Masked Pony and Twilie Atkins in which the uploader had indicated that Disco Waffle had commissioned them to make the art. Disco Waffle did acknowledge on Twitter that he had requested the art of as a joke but denied further involvement beyond.

On January 15th, 2018, Disco was banned from La Casa De Trolls chat after a minor incident between the moderators. Following this, he released a text file revealing that he had been behind several ploys against both the Inner Circle and other members of the community: The doxing of the Inner Circle members in March, the doxing of SharpSplicer, and the framing of InsaneEnergy as the Cleveland Caller. The text file had also stated that after his ban from La Casa, he left the community.

Retrieved from "https://truecapitalist.miraheze.org/w/index.php?title=Disco_Waffle&oldid=16498"
Categories:
Cookies help us deliver our services. By using our services, you agree to our use of cookies.