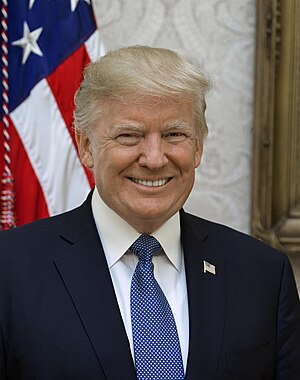 “Donald Trump is the greatest American president, he is the modern day George Washington!”

Donald John Trump is a businessman, reality TV star and the 45th President of the United States of America from Queens, New York. His capitalist views and manly dominance has lead Ghost to endorse Trump during the 2016 presidential elections, citing that he is creating "A capitalist revolution in America and throughout the world". His bid for the American presidency has been highly controversial, with many mainstream media outlets and both political parties siding against him.

Before Ghost's return for the 2016 Presidential Elections, Ghost's views on Trump were very mixed, and almost negative. Ghost would frequently refer to Trump as a "Skunk-headed asshole", calling him a "megalomaniac blowhard that we do not need in the White House". He was occasionally a show topic in 2011 and 2012 due to him considering a run for the Presidency at this time, meeting with other notable Republican candidates such as Newt Gingrich. Ultimately, Trump decided to not run in 2012. Ghost's views at this time were later used as a trolling tactic due to people finding these clips of Ghost talking about Trump and playing them later on.

During his Emergency Broadcast, his first on-air recording since A Message From Ghost, our host made public his endorsement of the 2016 Republican Presidential Candidate Hopeful, Donald J. Trump. He stated his views align very closely with Trump's, that he is a pure capitalist and that this may be the beginning of a "capitalist revolution".

Ghost claims that the establishment is working to prevent his presidency and that Mr. Trump is America's last hope. He believes that Trump will destroy the bureaucracy, end the life of the career politicians and change American politics for the better. He has stated that Trump is against globalists, and will stand against international institutions such as NATO and the United Nations.

Ghost believes that Trump will fix the American debt by cutting moochers off from their welfare and other government benefits.

He believes that Trump will investigate the "Bush Crime Family" and the Clinton Crime Family upon taking office and that this partially explains why both parties have taken such an adamant stance against him. He also loosely, along the same lines, supported Bernie Sanders' fight against his own party, saying 'Keep your ass out of the Trump train, make sure your own guy doesn't get screwed by these bureaucrats' though he adamantly hates and criticizes the man and his 'leftist, liberal, communist policies.' Since the June 7 primaries, Ghost has been against Bernie for not doing anything about the blatant voter fraud against him, and that he was just in it for the money.

Ghost has utilized the Capitalist Army several times to support Trump. He, at Tub Guy's proposal, launched the Chalkening, an event in which Capitalist Army members drew pro-Trump messages on their college campuses across the country and world.

John Kasich came under attack by Ghost, with him requesting his Twitter followers to tweet at DGTBOW, a man who lived with Kasich whom Ghost believes may have been a former lover. His Twitter followers have also been utilized to criticize Paul Ryan for his possible running in the chance of a contested convention. Ghost pointed out that men 'just seem to drop dead' around Paul Ryan's mother and that, each time, she's benefited financially and that there seem to be no records of their autopsies. Ghost covered the Colorado GOP's refusal to allow Republicans to vote, handing the delegates instead to Ted Cruz and encouraged that GOP members there, and even those against Trump, protest for their right to vote, claiming that the GOP has implemented 'Jim Crow' laws.

Ghost has encouraged the Capitalist Army to make pro-Trump videos and memes, to wage cyber warfare and to redirect their troll terrorist tactics to the opponents of Trump. Ghost has said, and been repeated by some of his followers, that if Trump were to lose, the internet may no longer be a free place to allow trolling to take place and that this should be an impetus for trolls to direct their attentions in more important directions.

Into late May and June of 2016, Ghost has continued to support Donald Trump in virtually every single way possible by targeting Hillary Clinton, frequently covering and bringing attention to her scandals, rumors and conspiracies surrounding her. Ghost has often mentioned the 'alarming number of people who have just dropped dead' around the Clintons. One of the closest times Ghost has come to criticizing Trump in any capacity is, after a troll made the suggestion, pleading to him, 'Trump, if you're listening, DON'T PICK SARAH PALIN [as your Vice President], PLEASE.'

Ghost came even closer to straight up criticizing Trump in July 2016 after he picked Mike Pence as his vice presidential running mate. Ghost felt that Pence was a Dan Quayle level pick for vice president, and suspected that the decision to pick him as vice presidential running mate was done as part of a deal made with the Republican establishment in order for them not to plant Ted Cruz in his place. However Ghost wasn't completely against picking Mike Pence and still felt that he was a better pick than Sarah Palin, but kept hoping that Trump would pull a fast one on everyone and pick a different vice president.

On occasion, when Trump hosts rallies in Texas, Ghost will state that he's going to cut the show short to potentially see Trump in person. Ghost often claims that he has inside knowledge and is closely connected with Trump and his campaign, going so far as to say that one time Trump was in Austin, "him, Trump and the boys were grilling some steaks".

Despite polls, pundits and the press predicting a victory for Clinton, Donald Trump won the election in a historical upset and became the 45th president of the United States of America, much to Ghost's joy. Ghost celebrated Trump's victory and said that the Meme Wars had been won.

Over the years since Trump took office, Ghost’s support slowly descended into the extreme, as he has claimed countless times he was ”Ride or Die with Trump” and ”I would follow that man into Hell!” It has gotten to the point where any real recordings of Ghost criticizing Trump in 2011/2012 are immediately dismissed as splices and immediate rage and any legitimate criticism is meet with denial or excuses.

After Trump became president in 2017, Ghost has been quick to praise him as the greatest US president of all time and has gone as far as to call him the second coming of George Washington. Ghost has frequently supported Trump even in his more controversial policies such as the Shayrat missile strike, appointment of Ajit Pai as the head of FCC and by extension, the repeal of Net Neutrality.

Ghost has also criticized the public notion that Trump is pro-Russian, citing events such as the above mentioned missile strike and the arming of Ukrainian military show that Trump is fighting against the Russians.

The first time that Ghost completely disagreed with a policy set by Trump was in Capitalist Episode 582 when Trump was forced to sign an executive order to undo the act on separating illegal immigrant children from their parents. Much of the episode was focused on Ghost calling American people stupid, ignorant, emotional and immature for falling into such an obvious political stunt.

After a dragged out presidential election in 2020, Trump lost to Joe Biden on November 7th. Trump, however, has refused to admit defeat and has claimed that the victory was thanks to voting fraud and is taking Biden to court. Ghost was disgusted with how many Americans were willing to vote for Biden, seeing that his vision about a "loser revolution" in America decade ago was coming true and like Trump, he blamed voter fraud for Trump's defeat in key swing states. Ghost was still Glad that Republicans had held the senate, as this would make Biden's presidency one of constant compromses and showed that most Americans are still opposed the far-left progressive agenda.

Ghost rages hard at trolls related to Trump. There have been many Trump splices, including Ghost saying vile things about him, clips of Ghost's voice interjected into game-shows making jokes about Trump, among others. There have also been quotes that Troll Terrorists spliced to make him say stuff that he never said, including slow splices of him.

During Episode 417, Ghost attempted to call various prostitutes to convince them to quit their jobs, but had no luck. Someone then gave Ghost the number to the "Ooh La La Bar", which he called. After hanging up, Ghost found out that he had actually called Trump Tower, resulting in massive rage.

On Episode 520, Twilie Atkins prank called the White House using Ghost's voice, making it seem like Ghost calling out Trump. He was greatly enraged at the prank call and called out Twilie for making the call. Several other callers also made splices claiming to call Trump Tower with Ghost's voice, usually saying racial slurs, which caused massive rage from Ghost, and him pleading to President Trump that it wasn't him.

Retrieved from "https://truecapitalist.miraheze.org/w/index.php?title=Donald_Trump&oldid=20663"
Categories:
Cookies help us deliver our services. By using our services, you agree to our use of cookies.