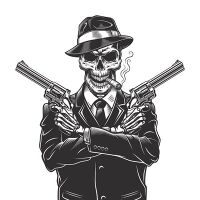 EastCoastCapitalist, or ECC is the owner and founder of The GhostPolitics Archive community, responsible for archiving the episodes of Ghost's many shows. He was formally known as Cans Abusing Meme Magician.

He has also created multiple characters, the primary one being KKAT, while other characters such as Capitalist Squirrel / PoliticsSquirrel and Capitalist PoopTickler are Twitter shoutout-only characters.

ECC hosts Ghost's show archive of his many shows, with the main archive being hosted on The Internet Archive, while a mirror is also hosted on Odysee. The archive was created as at the time, Ghost was streaming on dlive, which only preserves past broadcasts for approximately 72 hours.

In addition to the dlive episodes. all past broadcasts were also added to the archive, which proved useful, as Ghost would delete/private many early episodes of his many shows that he previously streamed on YouTube around June 2021.

A Discord server and a Matrix server are maintained, as well as a multi-channel YouTube network (and its associated Odysee mirror)

When Ghost started to stream on VaughnLIVE after his YouTube was temporarily suspended from streaming, ECC started a relay from his personal YouTube channel as a means to watch the show without dealing with the buffering issues that VaughnLIVE (at the time) had. This lasted from episode 75 of The Ghost Show, until the 108th episode.

Jackler would also provide a secondary relay, lasting from episode 92 to episode 108, and again, episode 139 until episode 146. ECC would briefly return to only relaying the Saturday Night Troll Show episodes when Ghost was briefly on Periscope, and would cease relaying on YouTube altogether due to many policy changes that YouTube enforced that would make it difficult to relay there.

The relay would return full-time, but hosted on dlive as opposed on YouTube, when Ghost was doing The Baller Friday Show on Odysee, and then when Ghost returned to VaughnLIVE full-time for The Ghost Show and the Spontaneous Sunday Show after Ghost was suspended from streaming on dlive for a week.

Having done splices and remixes in the past as Cans Abuser (and would retire the character by indirectly making it the reason the long-running Ghost turns his fans trans gag started), ECC would return from a long hiatus and debut the character KommiKat as a successor of the original troll character for several episodes before going into another hiatus. After splicer/remixer MKULTRA became notable for his N-word remixes, ECC would return from hiatus, and mark the return of the KommiKat character, but rebranded as KKAT, to prove that cans.wav-worthy splices can still be made without the need of using slurs (especially racial slurs). KommiKat would be renamed to KoolKat, to reflect on his primary goal.

Via his archive's discord server, he provides a splicer's resource section so fellow splicers could download spliceable audio bits for their splices and remixes.

Retrieved from "https://truecapitalist.miraheze.org/w/index.php?title=EastCoastCapitalist&oldid=20884"
Categories:
Cookies help us deliver our services. By using our services, you agree to our use of cookies.