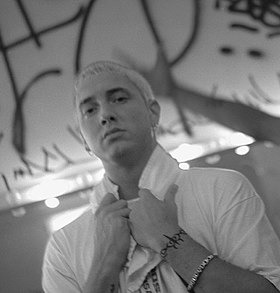 Eminem (Real name Marshall Bruce Mathers III) is an American rapper, songwriter, record producer, and actor from Detroit, Michigan. Eminem is one of the worlds best selling artists as well as the most successful white rapper of all time.

Ghost has a long standing hatred for Eminem and his music viewing him as "a cracker-ass cracker trying to be black" as well as a mockery of black strife, often bringing up one of his old tapes, "Foolish Pride" as a proof of his racism. Ghost has stated several times that he would beat him Eminem if he ever saw him in Texas. Ghost believes that once he's thrown in jail for beating up Eminem, he will be hailed as "Mr. Black People" by Mexicans and African-Americans and treated as if he was a sultan. Ghost has also mentioned not liking white people trying to act black and "studio-ass gangsters" in general.

Ghost's hatred of Eminem has made his songs a popular source of remixes among trolls. Calling up Ghost with an Eminem song or remix usually leads to Ghost once again explaining to the audience his long standing hatred.

Episode 374 saw extensive use of Eminem-related calls during Radio Graffiti due to the episode airing on his birthday, much to Ghost's dismay.

Retrieved from "https://truecapitalist.miraheze.org/w/index.php?title=Eminem&oldid=14200"
Categories:
Cookies help us deliver our services. By using our services, you agree to our use of cookies.