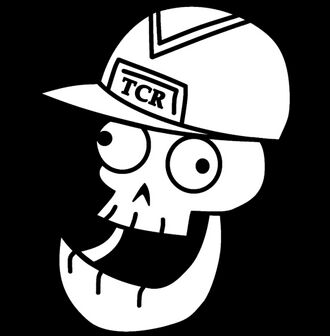 The official Engineer design by KaraszKun

The Engineer (or Engin Ear, as written in his postcards) is Ghost's main character on True Capitalist Radio and is responsible for moderation duties. These include locking down the chatroom, directing him retweets for him to give a shoutout to, and screening calls (which he does very poorly). Bearing a heavy speech impediment rendering his sentences to be nearly incomprehensible, there have been many rumors that the Engineer was written to be mentally retarded or drunk.

Most listeners to the show will realize fairly quickly that the Engineer is most likely a voice that Ghost uses in order to make the show appear more lively. 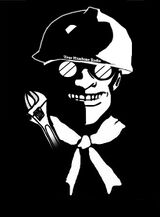 Prior unofficial artistic rendering of the Engineer's believed appearance.

Initially, the Engineer was the replacement to 'Paul the Liberal', a moderation character dating from True Conservative Radio. Although Ghost did voice impressions on his older show, he did not devote much time to scripted characters, and this character was for the most part invisible. The Engineer functioned nearly the same way (who debuted sometime around episode 10 in early 2011) until the June 2011 raids brought a large mass of callers to the show. Callers began giving shoutouts to him, with him responding back in thanks. His voice grew more distinct, and by September 2011 he was a sidekick to Ghost during the show, leading up to him starting trouble, much to Ghost's irritation (and the fans' great humor). It is unknown what the Engineer did in Ghost's absence, however he was heard again in the November 2015 message from Ghost.

The Engineer is still a prevalent part of the broadcast since the Return, though he had not taken the opportunity to take over the show again until Episode 353. Ghost has stated that he and the Engineer have come to an understanding on his behaviors on the broadcast, and states he will not cause any more problems on the broadcast.

In the July 2016 500-episode special, Ghost said that the Engineer had come in for the special occasion despite being a weekend broadcast, and even wore a "baby blue polyester ruffled suit thing". Ghost appreciated this gesture of support and enthusiasm, and suggested the Engineer use his outfit to sneak into a wedding and mooch the food and drinks there.

In Episode 367, the Engineer is heard weeping over the permanent ban of Teutonic Plague.

On Episode 560, as a result of BTR demonetizing Ghost, Ghost said to the Engineer that they may have to let him go from his job. However, on the following show, Ghost told the Engineer that "they'll be back" on their new proposed Internet Radio Station.

The Engineer is responsible for multiple novelties that Ghost is too proud to take care of during his show; most primarily locking down the Chatroom when trolling get out of hand and placing numbers for Ghost's screen to pick up. When Ghost asks for music to be played to make a point, fill the air during a break or cool down after a fit, the Engineer will choose something from the show's vast library of tracks and play it. Engineer will also scroll through the list of Twitter Shoutouts as Ghost reads through the names (eventually demanding him to 'take them off' the screen once they've become too deplorable). He can even call back numbers of individuals that annoy Ghost, so that he can berate them further if need be. The Engineer even gives Ghost his beers and cracks them open for him. 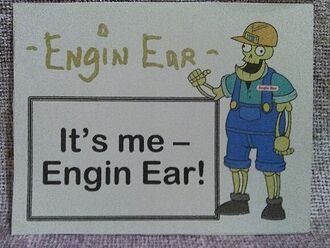 Engineer as seen in his official postcard at ghost.market

The Engineer is supposed to screen callers for Ghost to prevent trolls from getting on the air, but he has failed abysmally at this task since the very beginning of his job.

The Engineer is apparently able to place Ghost on mute and take the show for himself; this in itself is a novelty, only occurring twice - both times Ghost was playing a song while ranting about something, and the Engineer sneaked a few moments of fame in for himself before placing Ghost back on the mic.

Ghost claims that he pays the Engineer a salary for these duties, though he is ambiguous as to what this exactly entails - apparently enough so that he doesn't have to get him gifts for Christmas.

Ghost remains vague about the Engineer's personality and history, usually deflecting any questions about him with a terse 'don't worry about it'. This has led fans to develop various theories on the backstory of the character.

The most likely belief is that Ghost is actually the Engineer, and that Ghost does the voices himself by muffling his voice while bringing his mouth away from the microphone's sensitive area. This is strongly supported for numerous and obvious reasons that new listeners will often point out, but for the sake of enjoyment most fans ignore them and treat the Engineer as a true and honest person separate from Ghost.

The Engineer is known for his speech impediment that makes what he says nearly incomprehensible. It has been suggested that the Engineer was mentally retarded. Ghost usually denies these rumors but during the Ghosties, in which Engineer was allowed to give several speeches, Ghost referred to the Engineer as being "slow". He has also implied the Engineer to have some kind of mental disability on other occasions, such as opining that "KaraszKun's a little bit smarter than the Engineer", while implying both to have some kind of cognitive disability, and claiming that the Engineer thought that the My Little Pony character Derpy, whom Ghost labeled "a retarded talking horse", represented his [the Engineer's] "brand of demographic". The Engineer has a notably similar range of tastes to those of Ghost's.

In addition to featuring the first official artwork of the Engineer, the official postcards allegedly signed by him spell his title as "Engin Ear". It is unclear whether this is intentional or a reflection of the Engineer's apparent mental retardation; however, the childish writing of his "signature" supports the latter.

Another interesting point is whenever "Mr. Optimism" takes over the show, Engineer often sounds afraid, however it's unclear why.

From time to time, the Engineer will do things that are against Ghost's wishes, causing Ghost to threaten to fire him, although he never does. This has caused many listeners to claim that the Engineer is a spy, a meme borrowed from Team Fortress 2.

When Ghost first announced he was supporting Herman "Sugar" Cain as the GOP candidate for the 2012 United States Presidential Election, he assigned the Engineer to play a song to celebrate the endorsement. The Engineer promptly played the theme song from an 70s' blaxploitation movie with questionable lyrics, causing Ghost to rage and threaten to fire him.

The Engineer has hijacked the show in a few instances when Ghost apparently leaves after a fit (or takes a break). Generally, he will queue up the above mentioned theme, shout 'Herman Cain' through the song, and then mumble incoherently before taking some callers. This has caused many fans to declare that the Engineer should be the show host. Ghost, in anger, will declare himself the talent of the show in response to these prompts. This has of course, encouraged his listeners to retaliate with claims that the Engineer is the true talent.

Ghost has stated that he will fire the Engineer if people continue to encourage him to take over the show. This died down throughout 2012, but the Engineer remains a notable presence on the broadcast despite these claims. The Surgeradio.org guy attempted to persuade the Engineer to work for them at their studios in Los Angeles, but the Engineer declined, thinking that they were going to beat him.

When Ghost returned in 2016, the Engineer didn't take over the show for months, until he finally did it in Episode 353. Ghost then berated, and potentially beat the Engineer (Engineer was crying while Ghost was cans.waving) over the incident.

The Engineer took over the show again in Episode 367. He would call on Karaszkun, when he was interrupted by Ghost coming back, leaving Karaszkun still on the line until Ghost finally realized he was and clicked him off due to the events of previous shows. Ghost then berated and possibly beat the Engineer, threatening to fire the Engineer multiple times through the rest of the show. The strangest part about this was that when Engineer played the theme from the 1970s' blaxploitation film, he played a splice before it of Ghost saying an ethnic slur.

The Engineer has often been utilized in trolling and trolling tactics. He has been involved in splices, remixes and occasionally become the victim of verbal abuse at the hands of callers during Radio Graffiti. Callers often give shoutouts to the Engineer during Radio Graffiti, some of which are derogatory. He has often been mocked as a tard to which Ghost defends him and says, 'he's a good guy, leave the goddamn Engineer alone, alright?' despite Ghost occasionally calling the Engineer a tard.

Retrieved from "https://truecapitalist.miraheze.org/w/index.php?title=Engineer&oldid=14201"
Categories:
Cookies help us deliver our services. By using our services, you agree to our use of cookies.