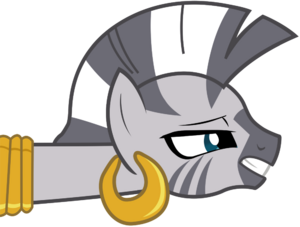 Ironically, EqC's avatar is a Zebra; fans of My Little Pony believe Zebras represent African-Americans in the show.

A former caller from Harlem, NY, EquestrianCitizen978 first called in the middle of December 2011 accusing Ghost of racism. Ghost cut him off and decided to quit that show for the day, only for 'the Brotha from another Motha' to call in again the next day claiming that Ghost threw him off on purpose, and questioned his hatred towards Bronies. Ghost eventually smartened up, as the two became rather friendly towards each other, such as on the Christmas broadcast. Ghost's viewers, however, hold a lot of animosity for EquestrianCitizen978, as shown through Episode 193's Chatroom Shoutouts.

His victory over Ghetto Capitalist in the Ghosties for 'Best Black Guy' was met with much uproar, and generally disagreed with. Many listeners accused Ghost of rigging the competition. Some thought that Ghetto Capitalist had already scored the best victory of all as Best Troll, so his Black Guy award was not necessary.

On December 15, 2011, Ghost asked EquestrianCitizen978 why he was called "Equestrian Soldier", then corrected himself to "Equestrian Citizen". EqC responded by saying "Because I'm representing the bronies!". This irritated Ghost heavily, who spent several minutes pondering the existence of "black bronies", and claiming that EquestrianCitizen978 was pretending to be a macho black guy, when he was in fact just another fruitbowl brony.

On January 2, 2012, he revealed (over Pony News Radio) to indeed be using a voice changer.

On January 10, 2012, he finally revealed his use of a voice changer to Ghost during Radio Graffiti on True Capitalist Radio. Ghost found it funny and expressed his wish that EquestrianCitizen978 had kept the ruse up; claiming, "Some people actually thought you were black!" Nevertheless, many trolls were annoyed with him, and opinions on him have remained split. Equestrian Citizen stopped trolling on the broadcast, and became a Serious Caller for the rest of the show's lifespan.

Retrieved from "https://truecapitalist.miraheze.org/w/index.php?title=EquestrianCitizen978&oldid=13877"
Categories:
Cookies help us deliver our services. By using our services, you agree to our use of cookies.