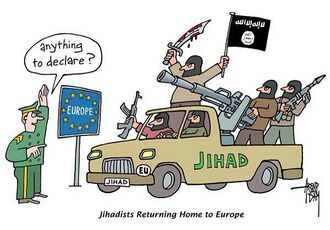 European Migrant Crisis or European Refugee Crisis is an ongoing series of events in which a large number of refugees and migrants have and are currently attempting to enter Europe. The crisis began in 2014 after an increasing number of refugees started to flood through Mediterranean and southeastern Europe. These refugees are largely males originating from Middle East, especially Syria, Afghanistan and Iraq. There has been a lot of controversy relating to these migrants, as many of them are believed to be sleeper cells for ISIS and Al-Qaeda and that many are incapable or unwilling to assimilate to western culture.

Ghost has referred to the crisis as "The Fall of Europa" and has blamed it entirely on the socialist and leftist leaders of the European Union. Ghost believes that the European Union are letting terrorists enter Europe freely and use their terrorist attacks to justify further totalitarian measures. Ghost has been especially critical of Germany chancellor Angela Merkel's policies during the crisis, calling her a "Totalitarian Hambone who has destroyed her county" and has encouraged Germans to overthrow her.

After Islamic politician Sadiq Khan was elected as the Mayor of London, Ghost said that the "London Bridge has fallen" and told that he was afraid for Britannia if Muslims had enough power in the country to elect a Muslim mayor into office. Ghost also mentioned that he thought that moderate Muslims are an even greater threat to the western world than the radical Muslims, because they are willing to overlook violence committed by radical Muslims. He had criticized London's handling of a terrorist attack after a presumed refugee started stabbing people on August 4, 2016, stating that the English government could use this to justify martial law in future terrorist attacks. He has also blamed current United Kingdom Prime Minister Theresa May for not doing anything about the terrorist attacks that were common during the Spring of 2017, one of which happened before an episode of True Capitalist Radio.

On the other hand of the Crisis, he has commended Poland and Hungary for their countries' efforts in fighting the European Migrant Crisis by disallowing the refugees into their countries.

Retrieved from "https://truecapitalist.miraheze.org/w/index.php?title=European_Migrant_Crisis&oldid=13306"
Categories:
Cookies help us deliver our services. By using our services, you agree to our use of cookies.