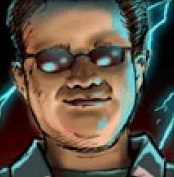 Gasgara was one of the few True Capitalist Radio listeners in the 2011-2012 era who was not a troll. He is a member of the True Capitialist Ring of Honor and he could often be seen showing his support of Ghost through either Twitter or Blog Talk Radio. This led some to believe that Gasgara is counter trolling by being Ghost's "capitalist butt buddy". Though Gasgara did not necessarily troll Ghost, it is clear he was fond of trolling in general. His YouTube channel, YouHateGasgara, was an outlet for this trolling. He was often found in the Capitalist Army Paltalk, prior to it being hacked.

Late in 2011, users began to accuse Gasgara of being a Tree, possibly due to his investing in the lumber markets, which he denied. Following this, trolls starting uses this accusation as a way to upset him. In Ghost's chatroom, trolls would often and constantly post the sentence "Gasgara is a tree" or show photos of trees (sometimes with his avatar picture on them) and claim it to be him. Ghost rarely commented on the "Gasgara is a tree" claims, but has once simply said that "he's not a tree" to the people in the Chatroom.

In late November and early December of 2011, troll accounts became a popular way to troll Gasgara. These accounts tended to be puns or intentionally misrepresentations of Gasgaras username. Examples of these accounts are GasgaryOak (a combination of Pokémon character Gary Oak and Gasgara), Gasgangrich (Newt Gingrich), and Gasgengara (the Pokémon Gengar). The accounts did not amuse him except for one named 'Gasgarmel' (Possibly a play on "Caramel" or "Gargamel", the antagonist of the Smurfs) which made him laugh.

Gasgara's only friend was a strange Canadian teenager who went by the username Suspicious Tumbleweed. She seemed to have a certain appreciation of Gasgara's "personality". They often talked over Twitter.

He also had positive relationships with IbanEzzo and uabusebeercans, although they did not stand the test of time and had ultimately sided against the former during the end of Troll War III.

Retrieved from "https://truecapitalist.miraheze.org/w/index.php?title=Gasgara&oldid=10242"
Categories:
Cookies help us deliver our services. By using our services, you agree to our use of cookies.