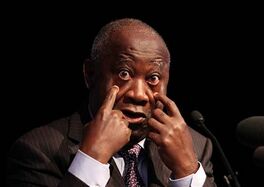 The Gbagb0b0b0 incident was a short dispute between Ghost and user Gbagb0b0b0 (name based off dictator Laurent Gbagbo and manga/anime character Bobobo-bo Bo-bobo). The situation started over Ghost following Suspicious Tumbleweed and Gasgara before following Gbagbo (all three bought merchandise from the official Cafepress store in exchange for follows) and resulted in Gbagbo reacting negatively on both Twitter and YouTube, leading to the community mocking him. Gbagbo eventually deleted both of his accounts following his reactions in shame.

In late 2011, Ghost began offering merchandise on a Cafepress site . The site included expensive products from shirts to bibs, which were considered to be of poor quality. Ghost promised that he would follow anyone who bought his merchandise. Many listeners found Ghost's follow a valuable thing and thus bought stuff from his store. One such user, Gbagb0b0b0, bought an expensive notebook and a 10-pack of greeting cards, tweeting a video of him using the notebook to Ghost (the greeting cards were meant for a later upload where Gbagbo planned to write Christmas greetings to some of his favorite Ghost fans, including one to the Engineer himself). However, Ghost missed Gbagbo's tweet and proceeded to follow Suspicious Tumbleweed (and Gasgara by proxy). Gbagbo noticed the follows and he instead reacted in rage and created the conflict...

I'm glad someone finally said it. 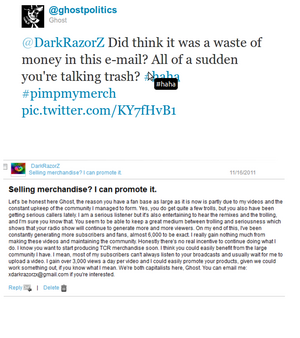 Gbagbo was upset over Tumbleweed and Gasgara getting followed despite Tumbleweed tweeting several days after Gbagbo's tweet and Gasgara apparently getting followed without buying anything, so he began to tweet negatively at Ghost about not following him as well as mocking Tumbleweed, Gasgara and PoopTickler (only after Gasgara and PoopTickler mocked his tweets). After the tweets, Ghost followed him but proceeded to also call Gbagbo names on both Twitter and his show. This caused yet another negative reaction by Gbagbo where he proceeded to make a video of himself writing "Fuck You, Ghost!" on every greeting card while Pharaohe Monch's "Fuck You" played in the background. He ultimately burned all of the cards with Nat King Cole crooning "Chestnuts Roasting on an Open Fire" in the background, flipped off the camera, then blocked Ghost's follow and tweeted him the video. DarkRazorZ misinterpreted the situation and supported Gbagbo and criticized Ghost's store. This resulted in Ghost releasing a message DRZ had sent Ghost suggesting that he start selling merchandise and even offering to advertise it on his YouTube videos. After learning all the facts, DRZ decided he had misunderstood and supported Ghost instead. Ghost eventually took pride at the outcome of the situation and claimed that he had won over both Gbagb0b0b0 and DarkRazorZ. Gbagb0b0b0 remained on Twitter for a short time following the incident, eventually deleting both his Twitter and YouTube accounts (along with his video) and going into exile.

Retrieved from "https://truecapitalist.miraheze.org/w/index.php?title=Gbagb0b0b0_Incident&oldid=14173"
Categories:
Cookies help us deliver our services. By using our services, you agree to our use of cookies.