“...I mean this man is like the Terminator alright. He can't be bargained with, he can't be reasoned with, he doesn't feel remorse or pity and he absolutely will not stop until he takes over THIS GODDAMN *cans.wav* WORLD! HE'S SICK!” 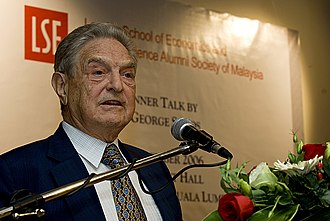 George Soros (birth name György Schwartz) is an Hungarian-American business magnate, investor, philanthropist, political activist and author who is of Hungarian-Jewish ancestry and holds dual citizenship (Hungary and the United States). He is chairman of Soros Fund Management. He is known as "The Man Who Broke the Bank of England" because of his short sale of US$10 billion worth of pounds, making him a profit of $1 billion during the 1992 Black Wednesday UK currency crisis. Soros is also a well-known supporter of American progressive and American liberal political causes. Soros is also a popular target of numerous right-wing Conspiracy Theories that range from blaming him for various deaths and disasters to claiming that he is the leader of NWO/Illuminati/Jewish World Order.

Ghost has a highly negative view of Soros to the point that he sees Soros as an almost satanic figure trying to take over the world by any means necessary, calling him The Prince of Freaking Darkness. Ghost has blamed Soros, among other things, for funding violent organizations and professional protesters such as Black Lives Matter, Antifa and Deray Mckesson, funding several coups around the world, as well as working against his own people during the holocaust. Whenever Ghost wants to prove Soros's sociopathy, he often points to an interview of Soros discussing the time he was living in Nazi occupied Hungary pretending to be the son of a government worker and seeing the deportation of numerous Jews to concentration camps (Ghost believes it goes further than this and that Soros outright took part in the deportations and confiscation of Jewish property), calling it "the happiest time of my life".

Beginning with Episode 338, Ghost has regularly imitated George Soros whenever he becomes a subject matter during the broadcasts. Ghost's Soros impression involves speaking in a deep, raspy voice with a thick Hungarian accent and proclaiming various things to be "mine", culminating in "EVERYTHING IS MINE!". 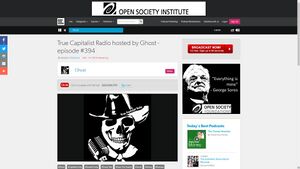 Trolling relating to George Soros has been very rare at first; however, it's known to be a sensitive subject matter to Ghost, often driving him into cans.wav as well as giving a lengthy soliloquy about the man. After Ghost imitated Soros in Episode 338, there has been an increase in George Soros-related splices, which often involve Soros bringing down his wrath on Ghost and killing him.

In Capitalist Episode 394, a troll sent Ghost a photoshopped image of George Soros's Open Society Foundation advertising on the True Capitalist Radio page on Blog Talk Radio. Ghost believed the image was genuine, fueling his paranoia that Soros was personally funding efforts against not only the Trump Train as a whole, but also True Capitalist Radio itself.

Retrieved from "https://truecapitalist.miraheze.org/w/index.php?title=George_Soros&oldid=14203"
Categories:
Cookies help us deliver our services. By using our services, you agree to our use of cookies.