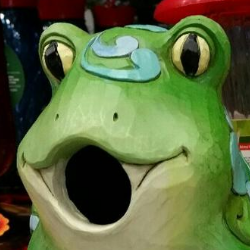 Germit the Gay Frog is a troll character who is a parody of Kermit the Frog. Germit made his debut on Episode 255. Due to his phone quality, Ghost originally heard his name as "Kermit the Gay Frog", and sometimes called him "Gay Kermit".

As the name implies, he is a gay frog who makes sexual advances to Ghost, much to his dismay. He started calling frequently in June and July 2016, where he was met with mixed reception. While he barely called in the fall, he was one of the few remaining characters that still called Ghost, the others being Tub Guy, Moon Man, and Twilie Atkins.

Germit started to call again in the winter, to a better reception. He has been in a few splices, and made fun of Ghost's more serious fans, like KaraszKun and Trumping.

Germit himself did not return when Ghost came back from the Break, and has since been imitated by other trolls. Notably, J-Man took over the role for various scripted skits since Ghost moved his show to YouTube, and began to sound closer to Coodoo's version of Kermit than the unique persona. At the same time, other characters like Rozzie (a pastiche of Fozzie Bear) and Trans-Piggy began to appear with him as one-offs. J-Man eventually gave the role to Ardhamon so he can pursue other ideas but occasionally will portray him. The Germit account that sometimes appears in Ghost's YouTube chat is also not the real deal' that's the splicer Zed_Commander who puts together J-Man's Germit splices. Ardhamon's Germit tends to appear in splices that have him performing various gay sexual acts with Ghost and usually do not have a story line.

Retrieved from "https://truecapitalist.miraheze.org/w/index.php?title=Germit_the_Gay_Frog&oldid=18399"
Categories:
Cookies help us deliver our services. By using our services, you agree to our use of cookies.