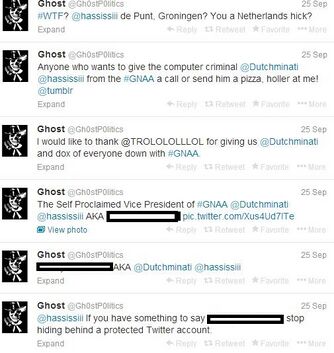 The tweets that started the event.

The @gh0stp0litics doxing event was a feud on Twitter between 'gh0stp0litics, the once presumed-alternate account of Ghost of True Capitalist Radio (which had ended 16 months earlier ) and a group of GNAA trolls.

The event began when 'Gh0st' suddenly exposed information about infamous GNAA member Dutchminati (once known as DutchCapiatlist) onto Twitter, with trolls reacting in humor, citing that it was a puppet dox made to throw off those who attempted to locate him. Dutch was responsible for numerous online trolls, most notably the 'Sandy Loot Crew' and 'Cut4Bieber', and Gh0st claimed he wanted to put him to justice for these events (and for hacking Ghost's old Twitter 'ghostpolitics' late in 2012).

Increase of Activity on @gh0stp0litics

From September 27th, 2013 onwards, the Twitter account associated with Ghost, @gh0stp0litics, began to rapidly increase in volume of tweets being issued. This culminated in a tweet declaring a return on October 31st, 2013 to the True Capitalist Radio broadcast. The Capitalist Army, GNAA, trolls, bronies, and all other fans of the show began a frenzy of activity in the belief that the show was to rise again; indeed, many of the more talented splicers began to prepare a host of new "material" in preparation for his arrival.

The excitement, however, quickly changed to concern on @gh0stp0litics: "Ghost" set up a bitcoin address and began to ask for donations to "ensure his return". This, in turn, prompted many trolls and viewers to insult "Ghost" for not acting like a Capitalist, as his begging behavior greatly resembled the socialist system he had railed against countless times on the broadcast. Soon, cries of #moocher filled the Twitter page, with many voicing extreme dissatisfaction with this behavior.

In response to this outcry, to clear the air in preparation for a return to the show (assuming this was the real Ghost), or simply to cause mayhem (assuming this was a troll in control of the account), @gh0stp0litics posted a series of purported "doxes" of former True Capitalist Radio fans and trolls, many of which proved to be false. This behavior prompted outcry from not only the trolls, but Ghost's former fans as well: "Gh0st" entered into a long argument with former serious fan Vince in the Bay that presumably has ended their friendship, while KaraszKun not only called out "Gh0st", but voiced his displeasure for having waited a long period of time for no new show, and temporarily closed his Twitter account out of anger.

The Bitcoin account linked by "Gh0st" received four donations, with roughly 0.14 of a Bitcoin in the account at peak the most. The Bitcoin address reports that between December 5th and 7th the holder made three transactions of his earned Bitcoins - reducing the wallet to zero. This coincided with a massive gain in the value of a single Bitcoin during late November, and early December (before some sort of issue with the Chinese caused the coins to crash back down after about a month of huge profit accumulations) - almost 1,200 dollars for a single coin.

Math calculations (.14 multiplied by that number) tell us that he accumulated 168 dollars with his deposit by waiting before the prices finally crashed. Thus, there was an extreme sense of capitalism displayed here, but there is no telling where this money has gone since it has left the address wallet. It's uses by the assumed troll are impossible to determine, but are likely to be pocketed for personal means and not to fund any sort of BlogTalkRadio show, based on prior evidence.

Following promises to conduct a show on Halloween, Gh0st instead told off the fans on that date, and declared that they did not pay him enough money, and that they do not deserve his presence. Needless to say, just about all of his fans unfollowed him on the 1st, and Gh0st mocked his fans, and referred to himself in the third person once again.

His remaining few weeks on Twitter after the feud were mostly about hacking and the failure of Obamacare.

Upon Ghost's return to BTR in 2016, he stated that any twitter activity in the past 4 years was not him, proving that Gh0st and any other supposed accounts of Ghost on twitter were fake.

Retrieved from "https://truecapitalist.miraheze.org/w/index.php?title=Gh0stP0litics_Doxing_Event&oldid=11648"
Category:
Cookies help us deliver our services. By using our services, you agree to our use of cookies.